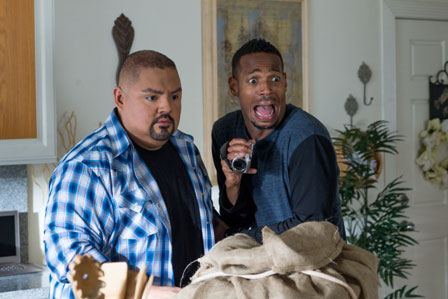 Going Solo and Creating His Own Destiny

After the screening, Wayans participated in a special Q&A session with fans of his highly acclaimed work from television to film.

The next day, Regal Magazine sat down with Wayans and co-star Gabriel Iglesias for our own Q&A in which he discussed everything from working without his brother Shawn Wayans, working with the best comedians regardless of color, and the special craziness it takes to have sex with a doll on screen in what is sure to be a classic scene from “A Haunted House 2” for years to come.

Furthermore, Iglesias described his comedy in the film as adding spice to a finished dish.

Regal: How have you grown as a writer now that you are doing a lot of projects without Shawn?  And what are some of the things that you guys bump heads on?

Wayans: We never really bumped heads.  We actually get along really well.  We compliment each other.  We do have different styles.  Shawn, he likes to write in his house.  He likes hanging out.  Shawn will like hang out for 12 hours and laugh, and we’ll get like two hours of work done, but we’ll have a great time.  Me, I’m like yo, we’ll work eight hours or five hours and we’ll just go bang, bang, bang, bang, bang.  And we’ll laugh between…on the pitches.  But, I kinda like Shawn’s process of work, but mine is I don’t want to take too long…I like working, I like acting.  The more I get this done, the quicker I can get to filming.  But his process is a lot of fun.  I love, love working with Shawn and it was never that we bumped heads, it’s just I hit 40 and I was just like, you know there’s things I wanna do.  And I have visions and images like crazy…. I don’t think my brothers are gonna let me hump a dog.  I wanna hump dogs man.  I wanna hump stuffed animals, you know.  I have people to offend.  I wanna offend everybody.  I can’t do that when people give me a conscience.  So, it’s good to kinda do me and make my choices.  Pass or fail, they’re my choices and I can live with it.

Regal: When we talked last year, you talked about doing colorless comedy and your family is known for hiring the best comedians regardless of color.  Your brother Keenan (Ivory Wayans) once said that he’s not going to hire a “brother” to film his project just because he’s Black and have his film out of focus.  But recently, J. Anthony Brown told me that it is extremely hard for comics of color to get jobs in front of the camera and as writers.  So, is there any added pressure to give opportunities to comics of color because of the lack of opportunities?

Wayans: I think it depends on the situation.  And I think what Keenan was saying was, you know, “look, hire the best person for the job, period.”  For us, yeah your focus is always on yeah I wanna hire Black people, but I can’t hire a Black guy to play a Mexican guy.

Iglesias: That guy (pointing to himself).

Wayans: That’s the one role you got (speaking to Iglesias).  I think when it comes down to it, you know, it’s all about your training and the more time that you got under your belt, the more prepared you are for your situation when it comes up.  I would tell people of color to write and create their own destiny.  You become a creator and then you hire people.  You put yourself in that position because Hollywood ain’t gonna hire you.  It’s not that many roles out there, so you gotta create your own lane, your own destiny.  Start producing your movies.  I tell (Gabriel) you start working on developing your movies because at the end of the day you have to be your own brand.  So, I hope to inspire people to do that cause I’m doing me.  I’m doing what anybody, honestly, can do.

Regal: You mentioned it last night with YouTube and iPhones and just doing your thing.

Wayans: Yeah man, it’s out there and you just gotta go get it.  It’s not sitting around waiting on opportunity.  You’ll be waiting a long time.  You gotta go make it happen, go create.