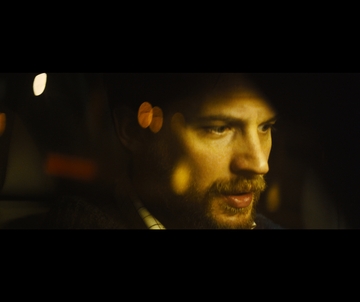 Tom Hardy proves he can ride solo in “Locke” (Photo Credit: A24 Films).

If Only He Had Unlocked the Door at Least Once

A usual criticism of many films is that the movie was unrealistic.  Critics and moviegoers alike complain when a storyline is so far from reality, even if the film entertains, enlightens and informs.

What happens when a film is so realistic that it bores despite great cinematography, great acting and a groundbreaking approach?  “Locke” starring Tom Hardy and multiple voices on a telephone answer those pressing questions.

Like many fatherless children, Ivan Locke (Hardy) makes it a point to be everything his absentee father was not.

He is the best in his profession of construction engineers.  He has a loving wife, who even cooks special meals for him during soccer games.  And he has two adoring sons that hang on to his every word.

Ivan has made it a point to do everything by the book and reverse the curse of the Locke name.  He is so determined to be the antithesis of his father that he has arguments with his invisible father when the stress of life gets to a breaking point.

However, Ivan commits the sin of adultery after a one-night stand with Bethan (Olivia Coleman) while he is away from his wife for three months during a construction job.

The result is an unwanted pregnancy with a woman that he does not really know.

When Bethan goes into labor two months early, Ivan decides to put his career and marriage on the line to travel to London so he can be there for his illegitimate child.

What complicates matters is that the baby is expected on the eve of the biggest construction job of his career and no one at the company can handle such a large job without his guidance and expertise.

The film “Locke” is an 85-minute interstate drive to London with a man at a crossroads in his life.  That is it.

Ivan is the only character to receive screen time, with the other actors only contributing their voices via telephone calls to and from Ivan.

What makes “Locke” avoid being the dullest film ever is the fact that it is probably the most unique film ever.

Hardy is a talent that is appreciated in acting circles, but I am not sure that he gets his just due from mainstream audiences.  He was brilliant in “Inception” and charismatic in “Lawless,” but in “Locke” he proves that he is one of few actors that do not need help from co-stars.

“Locke” is basically his very own showcase and the show he puts on makes a very good case for him being one of the best thespians in the game.

The nighttime, vehicular cinematography of Haris Zambarloukos is breathtaking.

Ivan’s struggle and determination to be a real man is relatable for all men.

And the storyline and creativity of screenwriter Steven Knight is groundbreaking.

Nevertheless, all of those positive attributes are not enough to stop “Locke” from being dull and boring.

The phone conversations are great, but it would have been great to visually see the reaction of Ivan’s wife to his affair and to see how his children react when they finally realize their parents are splitting up.

It would have been wonderful to see Ivan and Bethan interact physically after the birth of their illegitimate child.

And it would have been fabulous to see how the construction job fared without Ivan’s physical presence.

“Locke” is only 85 minutes long, so Knight had ample time to bring the other characters into the last part of the film.

Adding those elements would have still kept the film realistic, but not realistic to a fault, which is the downfall of the movie.