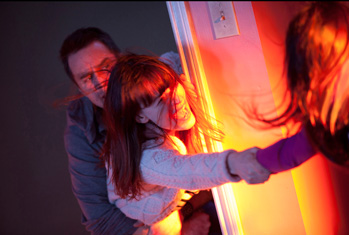 God knows what He is doing at all times and that’s probably why I do not have children yet.

If I had three children and demons in my haunted house took one of them and proceeded to terrorize my family and I, I’d probably let the demons take the child and the house.

Why get killed over foolishness?  In the scenario in “Poltergeist,” I would still have two more children and a beautiful wife.  As Charlie Sheen would say I’d still be “winning.”

Luckily for Maddie Bowen (Kennedi Clements), her father Eric Bowen (Sam Rockwell) is a better man than me, as he spares no cost to bring his daughter back in the remake of “Poltergeist.”

In the film, the sarcastic Eric is laid off from his corporate job at John Deere, but the family is able to stay above water by purchasing a foreclosed home in a seemingly affluent neighborhood.

Unfortunately for them, the neighborhood is built on top of an old cemetery that is the final resting place for many people who died horrible deaths.

From the get-go, something is amiss pertaining to the new home.

Maddie isn’t concerned with the demons in the house that she can hear but cannot see because she is accustomed to talking to her imaginary friends.  The demons are just more friends for her to hang out with.

However, her big brother Griffin (Kyle Catlett) is immediately turned off by the paranormal activity wreaking havoc in the home.

Unfortunately like most parents, when Griffin tries to warn his father and mother Amy Bowen (Rosemarie Dewitt) about the haunted house, they assume he is being a scared little boy and not the “Super Boy” his mother wants him to be for his sisters.

And when they finally realize his misgivings about the house are warranted it is too late to turn back from the poltergeist attempting to take Maddie.

“Poltergeist” is a good film, not great, and does not equal the original.

But that does not mean that this version “Poltergeist” is not extremely scary.

The film is scary, but not ridiculously frightening.

Rockwell’s sarcasm is perfect and Catlett is very likable as well.

The rest of the cast does an adequate job in their roles too.

Unfortunately, “Poltergeist” falls into the understandable horror film clichés with the dolls and the demon-possessed homes.

What is remarkable about this film is how they combine modern technology, like the superb drone scene, with the horror film necessities.

The technology allows the “Poltergeist” franchise to remain fresh and not outdated.

Furthermore, writer David Lindsay-Abaire is able to inject some comedic moments in this remake of the Steven Spielberg classic.

Unfortunately, the film was not scary enough to make a grown man cry or cover up his face.

Nevertheless, if God ever blesses me with children and demons snatch one of them and take over the house that might scare me enough to run away and never look back, even if this film did not evoke the same fear in me.