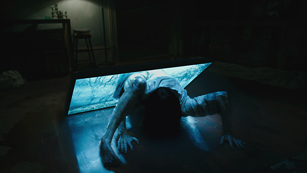 What would you do if you knew the exact date, hour and minute of your death?

What would you do to prevent the inevitable from happening?

And what lengths would you go to in order to save a loved-one from their predetermined demise?

“Rings” attempts to answer those questions in a weird and ineffective way.

In the film “Rings,” a VHS tape is circulating that prompts the recipient to watch it.

What the viewer sees are visually cryptic and odd messages, which do not have much meaning to the viewer.

However, what adds meaning to the video is the phone call that viewers receive immediately after completing the video.

The caller informs the viewer that since they viewed the tape’s contents, they only have seven more days to live.

When one viewer, Carter (Zach Roering), gets close to his demise he happens to be on an airplane headed to Seattle.

The bad thing for his co-passengers is his death affects them too as the plane crashes killing other passengers, not just Carter.

When the two arrive home, Gabriel realizes that there is a VHS tape already in the VCR.

Unfortunately, Gabriel watches, which gives him only seven days to live.

However, being the respected professor and researcher that he is, Gabriel gets the assistance of some of his students like Holt (Alex Roe) by having them watch the video too in an effort to reverse the pending doom.

Ultimately, when Holt’s high school girlfriend Julia (Matilda Lutz) cannot reach her boyfriend for an extended period of time, and after she receives a bizarre Skype call from Skye, she makes a surprise visit to his university.

When Julia finds out what Holt has gotten himself into she puts her life in danger to save his.

Julia wants to discover what the video means, and what the caller is trying to accomplish with the mysterious death threats.

Unfortunately, “Rings” fails to deliver much because of the unrealistic storyline.

Sure, horror films are not supposed to be very realistic, but there is something not well planned in a storyline in which a person, who watches a video, gets a random telephone call threatening their lives in exactly seven days.

The ending of “Rings” is quite suspenseful, with its twist and turns, but the storyline that gets moviegoers to that point is not very creative.

Galecki’s role shows him trying to branch out beyond his “The Big Bang Theory” typecast.  But the role of a “brainiac” professor is not that much different from his famous television role.

On the contrary, Vincent D’Onofrio of “Law and Order: Criminal Intent” shows his broad acting range playing a blind and deranged hermit.

Furthermore, it is good to see Teegarden show her range as an actress, proving she can be more than the good girl next door like her character in the “Friday Night Lights” television series.

Despite the range shown by the actors, the plot might be a little too bizarre and far-fetched to produce a hit film, despite the bizarre nature of the horror genre.