Movie Review: Nothing Special About ‘Insidious: The Last Key’ 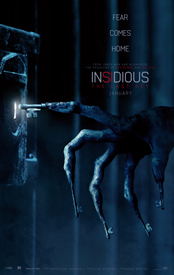 Chilling But Not Special

Something is seriously wrong and demented about a child when that child’s father does not want to be around them.

In “Insidious: The Last Key,” Young Elise (Ava Kolker) has gifts that allow her to communicate with good and evil spirits, a power that she eventually uses to rid people of paranormal activity in their homes and in their lives.

When people around the country have an evil encounter with ghosts, they try to set up an encounter with Elise Rainier (Lin Shaye) in hopes that she can help return their homes and lives to normal.

“Insidious: The Last Key” has all the chills and spookiness of its predecessors.

However, the film is not unique or special enough to set itself apart from the crowded pack of recent films in the horror genre.

Elise’s demanding father, Gerald Rainier (Josh Stewart) works at the local prison where the sound of death from the electric chair is a common sound in the family’s home.

Young Elise has a special gift of communicating with the dead.

Even without anyone telling her about the victims of the electric chair, she knows their entire life story from start to finish.

She even can communicate with the dead spirits that have haunted the family home.

While her father wants to beat her gift out of her, her mother, Audrey Rainier (Tessa Ferrer) understands her daughter’s gift and shows her support even though Elise finds it extremely difficult to be different.

However, when Elise lets in an evil spirit that kills her mother, things for the family will never be the same.

Elise eventually leaves her father and brother, Christian behind and moves to another region of the country.

She has no contact with her hometown and relatives until 2010 when the current occupant of her family’s home in New Mexico calls her for assistance in ridding the old house of ghosts.

However, what Elise finds in New Mexico brings more horror to her life than the house did when she was a mere child.

“Insidious: The Last Key” is not a bad film.  The movie is actually enjoyable.

However, nothing special exists to make it a must-see horror film.

As usual, Elise brings her ghost-busting sidekicks Specs (Leigh Whannell) and Tucker (Angus Sampson) with her for comic relief.

As Tucker tells anyone who will listen, Elise is psychic and Tucker and Specs are her sidekicks, which sort of sounds alike when said in the same sentence by Tucker.

“Insidious: The Last Key” boasts of some surprises when Elise realizes that every demon is not a spirit, and some evil spirits can exist within living human beings.

Unfortunately, the “Insidious” franchise has gotten a little too predictable.

While a film franchise should obviously see similarities with each film, becoming formulaic is never a good thing and “Insidious” has gotten formulaic.

“Insidious: The Last Key” has even laid the groundwork for possibly another sequel.

Nevertheless, the horror film is filled with enough demented evil to satisfy many horror film fans and that might be enough to do well at the box office.