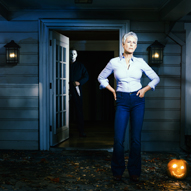 Brutal, Gruesome and Evil But Astonishing

Something is seriously wrong with the infamous Michael Myers.

But of course, “Halloween” fans already know the obvious.

Like my cousin Brent would say, he must be affected in the head or something because sane individuals do not butcher innocent people for no apparent reason.

Forty years ago, Michael escaped a mental institute after his incarceration for the murder of his sister.

Michael had barely reached elementary school age when he bludgeoned his teenager sister to death in 1963.

Upon his escape in 1978, he wreaked havoc on the town of Haddonfield, Ill in the original “Halloween.”

Now on Oct. 31, 2018, Michael has escaped his mental institution again when the bus carrying him and other patients to a new institution crashes on a dark and deserted road.

The town of Haddonfield has grown apathetic over the last forty years, except for Laurie Strode (Jamie Lee Curtis).

Unfortunately, Haddonfield will soon have to wake up from its apathy to deal with the evil, gruesome and brutal wrath of Michael Myers in the sequel to “Halloween.”

The funny thing about thinking people are affected in the head is that sometimes the people that appear cuckoo for Cocoa Puffs or those who appear to have a few screws loose are not crazy at all.

Like Laurie, many people have experienced such traumatic events in their life that they become overly protective and overly cautious to the point of obsession.

Laurie’s obsession with protecting herself and her family has led to lost relationships and the loss of a child.

At 12 years old, CPS snatched Laurie’s daughter Karen (Judy Greer) from her house and her care because the agency deemed Laurie an unfit mother.

Karen learned to shoot guns at too early of an age.

Her home with her mother Laurie became like a dungeon or prison designed to keep the evil Michael Myers as far away as possible.

And the teachings given to Karen by her mother Laurie often dealt with the treachery of the world and the fact that no one should be trusted, and no one should let their guard down because tragedy could strike at any time.

However, Karen wants to not believe her mother’s grisly and devastating tales of the past.

She wants to believe that the world is filled with loving and caring people that look out for one another, not evil, psychopathic serial killers like the infamous Michael.

While her parents will obviously attend the National Honor Society induction ceremony, Allyson desperately wants her grandmother Laurie to attend as well.

However, thinking that Laurie is off of her rocker with her weird fascination with Michael Myers, Karen and Ray want Laurie nowhere near their daughter.

Nevertheless, when Michael escapes from confinement and returns to Haddonfield, Laurie’s warnings do not seem like a preoccupation at all when the deranged and evil killer returns to wreak havoc again on another Halloween night.

The 2018 version of “Halloween” deserves the adjective of astounding.

However, the horror/slasher film is more brutal and vicious than scary for moviegoers.

But the fear that the residents of Haddonfield experience at the hands of one deranged “human being” can be felt through the movie screens.

The thing about horror movies is that many contain elements that are so Hollywood and make-believe that while horrifying, people know that the plots could never happen in real life.

Horror movies should not always be realistic because like many movies, scary films represent an escape from reality.

However, “Halloween” will frighten people because the story of Michael Myers could actually occur in real life, and the storyline is not just some made up fantasyland that a filmmaker created in his/her own mind.

People have become familiar with people with mental issues.

And people have become familiar with prison escapes.

What people might not find familiar is a woman like Laurie who is so determined to protect her family and her town that she wants Michael to escape and wants him to come looking for her.

Because like my friend Payne would say, she has something special waiting for him.

And it is really special.

Much of the spine-tingling fear that Michael creates in others centers on the fact that he does not speak.

Even when journalists and psychologists try to understand him and learn about him, he remains mute.

And the fact that this infamous and psychotic killer waits until Halloween to inflict mayhem on unsuspecting and innocent people is pure evil and genius at the same time.

Just think about it.

Halloween provides the perfect cover for an evil genius like Michael Myers, a character forever etched in horror film lore.

To see a person with a mask or any other disguise will look normal on Halloween.

Opening doors for perfect strangers will always occur on Halloween.

And hearing the desperate cries of someone in fear or in need of help has become synonymous with Halloween.

Therefore, Michael Myers butchering as many people as possible while in costume will often blend in with the ghosts and goblins of Halloween night.

Unfortunately, like many horror movies, the 2018 version of “Halloween” has its head-scratching moments that defy common sense logic.

Many victims of the Michael Myers mayhem put themselves in unnecessary danger because of their naiveté and stupid curiosity.

But curiosity also killed many clueless individuals that should have known better.

A young child by the name of Julian (Jibrail Nantambu) proves himself smarter than his older counterparts when he gets the heck out of dodge instead of interacting with the “Boogie Man.”

Additionally, “Halloween” might contain some moments too brutal for all moviegoers, especially those with weaker than normal stomachs.

The performances are excellent from top to bottom, especially Curtis’ reprisal of the character Laurie Strode, one of the only people willing to take on the infamous Michael Myers.