Movie Review: ‘Get Out’ Confirms Genius of Jordan Peele 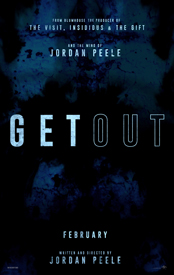 A New Dimension of Black Filmmaking

Sisters, on behalf of all of the brothers throughout the world a sincere apology is warranted.

For many brothers, the grass always seemed greener on the other side as it pertained to relationships.

Black women have endured stereotypes from Black men for decades, but none of those stereotypes were ever the enslavement of Black people in modern times or strong-arm cultural appropriation.

In the chilling suspense thriller “Get Out,” Chris (Daniel Kaluuya) pulls (to seek out and successfully pursue) a beautiful White woman named Rose (Allison Williams).

However, when Chris meets her parents, the White community that they are a part of has the intention of pulling him into slavery.

“Get Out” cements the brilliance of the talented comedian Jordan Peele (“Key and Peele”) while also making it a little more difficult for a White girl to pull a brother for the rest of 2017 or until the movie fades from memory.

By the way, all of the politically correct and racially sensitive folks can chill out because the introduction was meant to be tongue in cheek.

Photographer Chris, who is African-American, seems to be getting his life on track.

His career is earning him respect and he has been in a developing relationship with Allison for four months.

Although they have been together for only several months, Allison who is White, brings Chris home to meet her affluent and “progressive” parents Missy (Catherine Keener) and Dean (Bradley Whitford).

While Chris is reluctant to meet Missy and Dean because of their interracial relationship, Rose makes it clear to him that her parents are not racists and if they could have voted for President Barack Obama for a third term then they would have.

The aforementioned statement should have been proof of their racism.

Dean is a doctor whose father missed out on the 1936 Olympics because the legendary Jesse Owens took the spot.

Missy is a psychologist who specializes in hypnosis.  She even uses hypnosis to cure Chris of his nicotine addiction.

Despite looking normal and affluent on the outside, there is something oddly wrong about Rose’s family.

They have Black people working as servants throughout their property, but as Chris tells his friend Rod (Lil Rel Howery), they act like they have missed the entire Civil Rights Movement.

Furthermore, when the family’s rich White friends arrive for a get-together they poke and prod Chris like he’s the prime attraction at a slave auction.

When Chris recognizes a missing Black friend from Brooklyn, N.Y. at the get together acting and dressing strangely, he immediately realizes he has to get out of there quickly to avoid the same fate.

“Get Out” is pure genius from a filmmaker more known for gut-busting comedy than spine-tingling suspense and horror.

Peele’s film “Get Out” can possibly be a game changer for the African-American film canon.

“Get Out” stays true to Black culture and history but takes it to a new dimension, which will terrify moviegoers of all backgrounds.

The film “Get Out” only fails because the climax is somewhat predictable.

Nevertheless, the film is a cautionary tale regardless of race, that one never truly knows who they are in a relationship with.