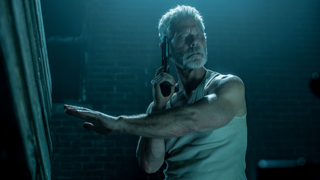 The horror genre of movies sometimes features the outlandish and outrageous, so much so that many horror flicks become more funny than frightening.

With the exception of “The Purge” franchise and several others, many horror films seem unrealistic and too dependent on the paranormal.

However, “Don’t Breathe” seems like something that could actually happen, combining stories that appear in newspaper headlines with the psychotic for an effective flick.

Thanks to the fact that Alex’s dad owns a home security company in Detroit, the trio has access to alarm codes and equipment, which makes home burglaries as easy as taking candy from a baby.

Their past heists are cool, but Money and Rocky are looking for a big score that will give them the resources to move to California, far away from their pasts.

However, since Alex’s father is in Detroit he wants to stay, but he cannot hide his growing feelings for Rocky and begins to contemplate his future in the “Motor City.”

When it is proposed that they rob a blind man who has come into some money after the death of his daughter, Alex is totally against it.

First of all, The Blind Man (Stephen Lang) lives on an abandoned street, which unfortunately is becoming commonplace because of the down economy in Detroit.

Furthermore, since he is blind he rarely leaves the house, meaning they probably would have to rob it with him asleep.

Money believes that The Blind Man does not trust anyone so the $300,000 settlement might actually be in the house somewhere.

Although Alex is reluctant to participate, the lure of that type of life changing money is too much to turn down and he joins them on one last heist.

The question in “Don’t Breathe” is whether it will be the last heist because they succeed or because they fail miserably?

The bad guys are the burglars.

The good guy is The Blind Man.

However, The Blind Man is also a bad man.

And, moviegoers will root for good to happen to the burglars.

The Blind Man is no joke and moviegoers will empathize with the plight of Rocky.

“Don’t Breathe” is also one of the few horror films with a moral.

The moral to the story is, is it worth it?

Is money worth that much that one would put themselves in harm’s way to get it?

Is money so important that one would steal from a blind man?

Is money worth dying for?

Nonetheless, the realism in “Don’t Breathe” does not come at the expense of creepiness and suspense.