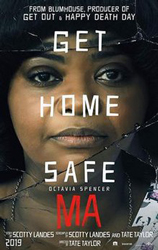 A New Day for African-American Actresses

Do you remember a time in the not too distant past when many African-American actresses complained about the lack of roles for them in Hollywood movies?

Many complained that many of the roles for African-American actresses revolved around certain stereotypes like the single mother, hood chick or maid.

But Academy Award winner Octavia Spencer is able to play a role as far from the stereotype of African-American women as possible in “Ma.”

In “Ma,” stereotypical does not describe Spencer’s portrayal as Sue Ann, also known as Ma to local teenagers.

In the process, Spencer delivers the most dazzling performance on the big screen of her entire career despite receiving the Academy Award for playing a domestic in “The Help.”

In “Ma,” Maggie (Diana Silvers) is the typical new student at her high school.

While she is not socially awkward, living on the outskirts of the socially in-crowd in high school can mean despising one’s teenage years because of the fact that they are not accepted by the cool kids.

Her mother’s marriage to her father did not last until death did them apart.

Therefore, Maggie and her mother Erica (Juliette Lewis, “The Switch”) pack up their bags and leave beautiful and exciting California for Erica’s small Mississippi hometown.

Fortunately for Maggie, several of the school’s cool kids like Haley (McKaley Miller, “The Iceman”), Darrell (Dante Brown), Chaz (Gianni Paolo, “Power”) and Andy (Corey Fogelmanis) take an immediate interest in her and welcome her into their popular clique.

Like many high school students, fun for Haley and the crew consists of drinking, smoking and partying.

The only problem that presents for high school students is that most of those extracurricular activities require having a birthdate that would make them long past their high school days.

As a result, the kids have to use their own creativity and ingenuity to get lit, in more ways than one.

Most of the people in their down south hometown refuse to participate in the illegal shenanigans of purchasing liquor for underage kids.

However, Sue Ann is definitely not like most sane adults.

As Jay-Z once said in Bun B’s song “Get Throwed,” she’s off her rocker; she’s a little schiz as in schizophrenic, mentally ill, deranged or crazy as hell.

Sue Ann reluctantly agrees to purchase alcohol for the children.

But when cops are alerted that underage kids are drinking alcohol at a popular, but public hangout, Ma allows them to party in her old, dusty and abandoned basement.

If that is not strange enough, Ma even takes the kids suggestions about turning the basement into a real hangout spot for kids, equipping the basement with a couch, snack bar and other amenities that would lure underage kids to the home of a strange adult.

Pretty soon, Ma’s house becomes the go to hot spot for high school students, even those who do not attend the same school as Maggie and her friends.

What most normal adults would view as totally inappropriate and weird, the kids see as heaven because they are allowed to drink and smoke with no rules and no threat of getting caught by the authorities.

But why does Ma show up everywhere the teenagers go?

How does Ma get the teenagers’ phone numbers?

Why does Ma want to hang out and party with teenagers as if she is still in high school too?

And what is up with Ma’s infatuation with Andy?

Like Chaz tells Andy, Ma wants to sit on his face.

But most importantly, what is that noise coming from the house that can be heard when the music dies down?

Ma said she is divorced.

Furthermore, she never mentions having children or having any other friends except for her party buddies who are young enough to actually be her children.

When Maggie and Haley begin having second thoughts about hanging out at Ma’s place, their new friendship with the middle-aged woman becomes something a little more sinister.

The kids soon realize that Ma is not just the cool adult who lets kids party and drink.

There is something more menacing and troubling about her as a person that goes back to her childhood and her experiences while at the same high school as her new best friends.

Nevertheless, there is no trouble in assessing the fact that “Ma” further proves that Spencer is one of the most talented and diverse actresses of her time.

“Ma” only errs with a somewhat predictable outcome of one of the basement party scenes.

Many African-American actresses could not show their full talent because of the lack of roles and the stereotypical roles often given to them.

However, “Ma” shows Spencer can do it all in Hollywood.

She can play period pieces as in “The Help.”

She can play historical figures as in “Hidden Figures.”

She can play science fiction roles as in “The Shape of Water.”

And she can play the evil, demented and deranged character as proven in “Ma.”

Much of what makes an actor or actress great is not just the spoken word.

Greatness from a thespian often revolves around their energy, facial expression and eyes.

Spencer’s eyes are so intense in “Ma” that she does not have to do anything psychotic for moviegoers to understand that her cheese done fell off her omelette to quote Houston-based rapper, Z-Ro.

When Sue Ann hits a pedestrian on the road, she does not stop to render aid.

She just turns her car radio on and listens to “September” by Earth, Wind and Fire.

The late Maurice White, Phillip Bailey, Verdine White and the rest of the boys from “The Elements” are to die for.

However, they are not to kill for.

And while Lewis and the rest of the co-stars in “Ma” handle their business to the utmost degree, Spencer’s role as “Ma” is a killer of a performance.

Hopefully, it is such a killer performance that it kills any stereotype that Hollywood might still possess about African-American actresses.