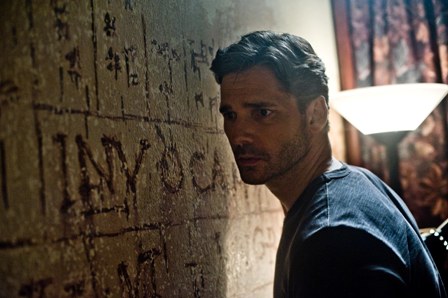 However, “Deliver Us from Evil” has a redemptive quality, despite the presence of demons and unbelief.

“Deliver Us from Evil” initially delivers moviegoers to Iraq in 2010.  Three United Sates soldiers are on a mission in the deserts of the Middle East.

They videotape their missions, but when they stumble on a deserted cave, they inexplicably lose the functioning of their camera before being attacked by something or someone.

Sarchie (Eric Bana) is a police officer with a calling for unorthodox cases.  He has a certain sixth sense that allows him to discern unusual and dangerous situations that may not peak the interest of other officers.

Inexplicably, Sarchie finds himself investigating mysterious crimes, deaths and strange activities from a woman throwing her child into a zoo’s lion’s den to his own daughter hearing noises under her bed.

With the help of an unconventional priest named Mendoza (Edgar Ramirez), Sarchie is finally convinced that some people are not innately evil; some have dark, evil forces within them that they cannot control.

Unfortunately, if those demons are not exorcised, the evil will only multiply and inflict more lives, which will lead to countless deaths and utter chaos.

Although “Deliver Us from Evil” is more creepy than horrific, the actors are totally possessed with reality despite falling into the horror film genre.

The film “Deliver Us from Evil” and its actors are not unbelievable in any way, even though they deal with spirits that many might find unbelievable.

Many people can relate to the character of Sarchie, along with his wife and daughter.

Although he grew up as an altar boy in the Catholic Church, as an adult he strayed away from God even though his family attends church on a regular basis without him.

He tells Mendoza that he kind of outgrew God.

Sarchie tells the priest that he sees evil on the streets everyday by people committing despicable crimes against one another and he questions where is God if He is allowing all of this to happen.

Mendoza explains to him that God’s love is in the hearts of first responders like him who risk their lives everyday for people they’ve never met.

However, if one believes in God they also believe in Satan, and unfortunately the devil is in the hearts of many as well, which leads to the evil presence on Earth.

Filmmakers do a great job of creating a religious leader who is not a saint, but a sinner who relies on God to rid the world of demonic forces.

Mendoza does not come across as a priest on his soapbox, but a shepherd who sincerely cares for his flock.

Likewise, Sarchie does not come across as a bitter cynic who is angry with God or skeptical about those who follow Him.

“Deliver Us from Evil” has the typical horror film moments from dead and possessed children, to run-ins with wild animals that apparently listen to those possessed with demonic forces.

However, it contains a larger story about belief, repentance and redemption, which can overcome all of the evils of this world.