Film Review: ‘Scary Stories to Tell in the Dark’ Has Something For All Audiences 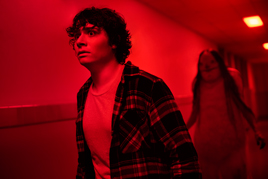 A Story for Everyone

No matter how much of a movie buff one claims to be, movie critics all have their favorite genres.

For me, gangster films, suspense films, biopics and historical dramas get me going.

But as a movie critic you gain an appreciation for all genres.

For me, I have gained a greater appreciation for superhero movies and horror movies over the last 10 years.

While “A Quiet Place” ranks as my favorite horror movie of all time, “Scary Stories to Tell in the Dark” has definitely catapulted into my top five horror movies of all time.

As a matter of fact, “Scary Stories to Tell in the Dark” might take the silver medal for second place.

“Scary Stories to Tell in the Dark” is equally creepy and awesome, with a unique storyline that has some longevity.

The trio is thick as thieves and is enjoying their last year in high school, but they still find themselves the victim of bullying thanks to the local jock, Tommy (Austin Abrams).

But as their senior year comes to an end, the trio has one last chance to get even with Tommy and his popular friends.

Halloween in Mills Valley, Pa. has been brutal for the trio over the years.

However, the group of friends has devised a plan to get even with Tommy for Halloween 1968.

When Tommy attempts to snatch Chuck’s trick or treating bag thinking that the bag is filled with candy, he’ll find something extremely special in the bag instead.

After Tommy discovers that his bag of candy is not very sweet at all, he chases Chuck, Auggie and Stella into a drive in movie theater.

To escape from Tommy temporarily, the trio hops into the car of a stranger named Ramon (Michael Garza, “The Hunger Games: Mockingjay—Part 1”).

After the coast appears clear and the movie at the drive-in theater concludes, the foursome of friends visit a haunted house at the suggestion of Stella.

The haunted house once belonged to the Bellows family, a wealthy clan from Mills Valley, Pa. that once owned the town’s printing mill.

Rumor has it that the Bellows had a strange and demented daughter named Sarah that they kept hidden from the public because of her eccentricities.

Despite Sarah’s differences, she is popular with the town’s children who want to get a glimpse of Strange Sarah.

The weird girl gets a reputation for telling scary stories to the town’s youngsters.

But when the kids arrive for story time, they never return home for some reason.

Despite the history of the home, the fearless foursome has no worries because Sarah died in the 1800s.

Furthermore, the stories of Sarah remain nothing more than a myth for most of the residents of Mills Valley, Pa.

Therefore, the friends have no problem visiting the house despite its reputation.

But after strange things begin to happen after Stella takes Sarah’s book of “Scary Stories to Tell in the Dark,” the friends realize the myth is more fact than fiction.

First and foremost, the writing in “Scary Stories to Tell in the Dark” is magnificent.

Often, horror movies try so hard to be scary that they inadvertently become comedies.

And while “Scary Stories to Tell in the Dark” contains some of the usual elements of a stereotypical horror film like the haunted house on Halloween, it has its own unique peculiarities that distinguish it from the pack.

Furthermore, “Scary Stories to Tell in the Dark” has its scenes of historical drama as well, which is right up my alley being the history buff that I am.

“Scary Stories to Tell in the Dark” deals with the 1968 presidential election, which saw former President Richard Nixon take over the presidency after his predecessor former President Lyndon B. Johnson decided to not seek reelection.

The film “Scary Stories to Tell in the Dark” deals with the controversy of the Vietnam War and the drafting of young men to fight overseas in Southeast Asia.

And the film delves into the 1800s with the story of the Bellows family and their weird daughter, Sarah.

Additionally, for romance movie fans, “Scary Stories to Tell in the Dark” would not qualify as a true teenage film if the movie did not have a budding teenage romance.

In addition to combining a few movie genres into one horror flick, “Scary Stories to Tell in the Dark” boasts of some good acting performances by the young cast.

Zajur’s offbeat performance as Chuck reminds me of young boys who have the pleasure, or displeasure, of having an older sister.

His relationship with his sister Ruthie (Natalie Ganzhorn), both loving and annoying at the same time, is something that many siblings will relate to.

Ruthie gets on Chuck’s last nerve and vice versa.

But do not get it twisted.

Do not come for a guy’s sister and not expect smoke, whether it is boyfriends or any other male trying to violate her.

Unfortunately, “Scary Stories to Tell in the Dark” has some moments that African-American moviegoers have grown tired of recently.

As a result of having a storyline that revolves around a prominent and wealthy family from America in 1800s, “Scary Stories to Tell in the Dark” would not be complete without Black servants in the big house.