Film Review: ‘It: Chapter Two’ Won’t Scare It Out Of You Like Predecessor 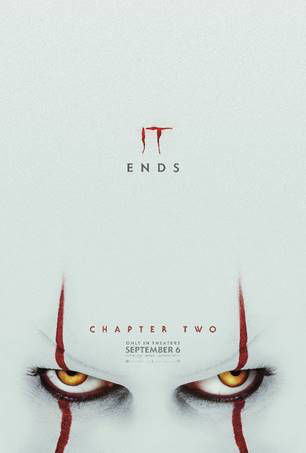 Too Over the Top

Three hours is a little too long for a movie not named “Malcolm X” or “Titanic.”

And for a horror movie, approximately three hours is way too long when the climax could have been reached quicker.

As a result, “It: Chapter Two” becomes a little too over the top and too ridiculous at times to justify a run time of two hours and 50 minutes.

And while 2017’s “It” was phenomenal, “It: Chapter Two” does not measure up to its predecessor.

In “It,” the youngsters of Derry, Maine drive out a clown named Pennywise (Bill Skarsgård) wreaking havoc on the town and kidnapping impressionable children like Bill’s brother, Georgie (Jackson Robert Scott).

However, the youngsters make an oath or a pact that if Pennywise ever decided to return to Derry, the Losers as they affectionately call their crew would return too and handle their business once and for all.

But because of the horror of its predecessor, the adults in “It: Chapter Two” have blocked out the horrors experienced in 2017’s “It.”

All but Mike have moved away from Derry and achieved success in their careers from authors to architects to stand-up comedians to risk assessors for insurance companies.

Therefore, 27 years after their initial run-in with Pennywise when the Losers all receive a phone call out of the blue from Mike Hanlon (Isaiah Mustafa, “Madea’s Big Happy Family”), they do not really know who he is initially.

Furthermore, all of the Losers have blocked out the horrific memories of 1989 and moved on with their lives.

So, when Mike reminds them of the oath that they made in the late 1980s, they have to return to settle a score that they thought they had settled before the dawn of the 1990s.

“It: Chapter Two” takes place in 2016 and not much has changed in Derry, Maine.

Many of the locals still want to get out and move to the big city like New York.

However, so many people never make it out of the small town alive.

Nevertheless, the town thankfully has remained quiet and somewhat safe over the last 27 years.

Unfortunately, after a transplant to the town is killed in a homophobic hate crime, Mike recognizes that the horror of 1989 has returned.

As a result, he has to persuade the Losers to all return to end Pennywise’s reign of terror once and for all.

While the rest of the Losers have dedicated their adult lives to climbing the corporate ladder, Mike has kept his feet on the Derry ground trying to figure out a way to stop Pennywise if he returns to his hometown.

Mike has discovered a ritual that the Losers can perform that would kill Pennywise off for good.

The problem is that all of the Losers have to return to Derry and participate in order for the ritual to have its desired outcome.

In “It: Chapter Two,” the majority of the Losers all do return to Derry although they do not all recognize each other initially.

But one member of the group is missing and it will be impossible for him to show up.

Will his absence help the Losers defeat Pennywise in “It: Chapter Two?”

Or will his absence hinder the Losers from defeating Pennywise in “It: Chapter Two?”

Furthermore, when the Losers finally realize what they are up against with the killer clown Pennywise, will they want to stay in Derry or will they high tail it out of town the first chance they get?

The dilemma in “It: Chapter Two” is if the Losers do not defeat Pennywise once and for all in 2016, his reign of terror will become uncontrollable and everyone will find themselves in danger.

While “It” scared the **it out of some moviegoers, “It: Chapter Two” does not compete in the category of horror.

“It: Chapter 2” has grander moments and bigger graphics, but does not produce bigger fear and spine tingling horror.

But “It: Chapter Two” does manage to depict the sincerity of childhood friendships like its predecessor.

There is something unique and wholesome about childhood friendships.

Furthermore, during childhood is where one often experiences their first crush or first love.

And sometimes no matter how many come after the first, the second time is not always the best time to debunk Shalamar’s 1979 hit song, “Second Time Around.”

Unfortunately for Beverly Marsh (Jessica Chastain, “Molly’s Game”) in “It: Chapter Two,” blocking out the past makes it difficult to determine who that real first love was, Bill Denbrough (James McAvoy, “Dark Phoenix”) or the new kid, Ben Hanscom (Jay Ryan).

But what “It: Chapter Two” really lacks is the charm from the children of “It.”

Although the young Losers all make cameo appearances in “It: Chapter Two” via flashbacks for the adults, the grown up Losers do not have the same charm as their younger counterparts.

Chastain is a great actress.

Furthermore, “It: Chapter Two” has its comedic elements thanks to Bill Hader who plays Ritchie.

But none of the adults have the mischievous charisma of the young Losers.

However, the biggest gripe about “It: Chapter Two” is that it lasts entirely too long.

Very few of the scenes were that monumental.

Therefore, many could have stayed on the cutting room floor and not made it into the sequel.