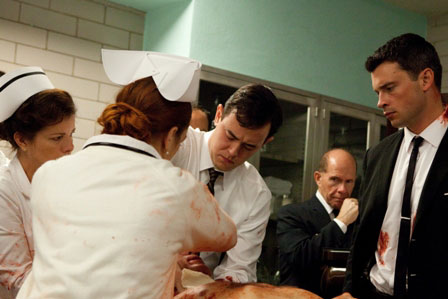 That fateful November day in Dallas changed a nation forever.  America’s fascination with Camelot came to a crashing and abrupt end.  The country’s innocence retreated forever with more political assassinations following.  Most importantly, two young children had to be raised by a widow who should have still been enjoying the position of First Lady.

But how did the assassination affect the ordinary citizens who were unwittingly thrust into an extraordinarily historic moment in American history?

The film “Parkland” tells the somewhat untold story of the ordinary Americans who will forever be connected to that horrific day in 1963.

The way “Parkland” weaves together the lives of ordinary people who do not previously know each other is reminiscent of Tyler Perry’s “For Colored Girls,” and is more powerful and smoother in its approach.

Zac Efron portrays Dr. Jim Carrico, the Parkland Hospital resident who is young enough to be fresh out of medical school, but is forced into the spotlight in an attempt to save a dying president.

He initially freezes upon realizing who is on the operating table, but tries desperately to save his president after it is obvious that President Kennedy is no longer with them.

His portrayal in the biopic “Parkland” is proof that Efron is not simply a romantic-comedy actor, but a serious artist who has a very bright future in front of him.

Abraham Zapruder (Paul Giamatti) purchases a new video camera to film President Kennedy’s trip to Dallas.  He finds the perfect spot on the parade route to get a glimpse of the president and it is his footage that gives the FBI an exact recording of the president’s last minutes.

Unfortunately, Zapruder’s life is never the same as a result of the law enforcement officials and media outlets who are after his film like a school of piranhas feasting on dead flesh.

“Parkland” does a good job of showing the impact the president’s assassination had on the family of Lee Harvey Oswald, and the demands placed on those in the medical profession to save everyone, despite the heinous actions that lead certain people like Oswald to their operating table.

The assassination of many politicians and civil rights leaders in the 1960s is similar to the threat that Americans now face from terrorism.  Many acts of violence could have been prevented if people heeded the warning signs that were in their face.

Furthermore, the filmmakers do an excellent job in casting the actors for these historic roles.  Jeremy Strong eerily resembles Lee Harvey Oswald.

However, the rest of the film definitely makes up for any lack of emotion that is felt initially, and we finally get to see how the loss of Camelot permanently affected ordinary Americans for the remainder of the lives.