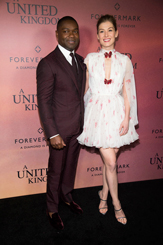 Hollywood must have gotten the memo.

The African-American community enjoys all stories pertaining to Black history and heritage, but the slave films have become redundant.

Members of the African-American community desperately want to see stories of African royalty on the big screen.

“A United Kingdom” starring David Oyelowo gives many moviegoers what they have been looking for and it is a decent effort, though it is not as good as similar films like “Loving.”

Seretse Khama (Oyelowo) is not the typical African college student attending school in London.  He is next in line to be the king of present day Botswana.

In 1947, Sertse is close to finishing his studies and returning home to Botswana to serve as king of his entire tribe.

As his studies draw to a close, his life becomes even grander.

He falls in love with the woman of his dreams.

To make the situation even more awkward, Botswana is under British rule, so subjecting the Africans to another White ruler is extremely insulting.

Furthermore, the British have made some strange bedfellows in their dealings with African nations.

They are conquering imperialists but they still fear the South Africans who are instituting apartheid or the complete separation of the races.

Botswana has allowed the British to rule over them in order to protect themselves from their South African neighbors.

In order to remain on good terms with the South Africans, the British refuse to accept the new king and queen of Botswana and they are determined to keep Seretse and his wife, Ruth Williams (Rosamund Pike) apart permanently.

Furthermore, both Seretse and Ruth have to deal with the ostracism from their family for their interracial marriage.

“A United Kingdom” deals with the consequences of love on two fronts and how achieving and maintaining various forms of love can be a difficult task.

Oyelowo is steadily ascending up the ladder of the best actors in Hollywood.

The British actor should have received an Oscar nomination for his role as Martin Luther King, Jr. in “Selma.”

Although his performance in “A United Kingdom” is not Oscar worthy, it is only a matter of time before he is nominated for the golden statue.

Pike is also effective in this role, which is different than her career defining moment in “Gone Girl.”

The film “A United Kingdom” also represents the old school versus new school tug of war within the races.

Many in the new school try to look past race and accept people as people, while many in the old school still want to hold on to old prejudices for dear life.

“A United Kingdom” shows what can happen when people see past the differences of others while still speaking up for themselves against tyranny.

Nevertheless, it is difficult not to compare “A United Kingdom” to “Loving.”

And unfortunately for “A United Kingdom,” the film “Loving” is just more interesting.

Regardless, Hollywood finally received the memo from the Black community.

The movie industry finally decided to profile African kingdoms and the continent’s powerful kings and queens.