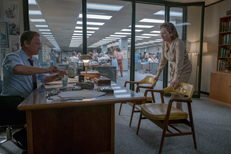 “All the President’s Men” represented a couple of things on a cinematic level and a journalistic level.

The 1976 film captured one of the most significant political moments in United States history.

It also captured one of the most significant journalistic moments in U.S. history, both being the Watergate scandal.

Both films are riveting and time will tell whether “The Post” is ever held in such reverence as its predecessor.

However, what sets “The Post” apart is its perfect timing.

During the Nixon administration, the White House tried to discredit solid reporting much like in the Trump White House.

Furthermore, the #MeToo movement, which is empowering women around the country in the workforce, can draw inspiration from Kay Graham (Meryl Streep), the first female publisher of a major United States newspaper.

In “The Post,” Kay is at a crossroads in life.

She lost her husband to suicide and now she is the publisher of the cash-strapped Washington Post.

Although she is the head woman in charge, she does not get the respect she deserves by her male counterparts on the company’s board.

Many board members do not hold Kay in high esteem because she is a woman, obviously, and the fact that her father willed the newspaper to her late husband instead of his daughter who adores the paper.

Kay’s business crossroads deals with her decision to take the financially struggling newspaper public, which will infuse much needed cash.

Unfortunately, going public will infuse the newspaper with a lot more opinionated people, which might complicate reporting controversial news.

That crossroads comes to a head when the New York Times begins publishing popular articles about a White House cover up of the Vietnam War that goes back four presidents.

While the New York Times is flying off the shelves because of those articles, the Post is struggling to keep up.

However, when the Washington Post gets hold of some leaked classified Pentagon Papers, the decision of whether to publish or not could make or break the troubled newspaper.

Hanks and Streep’s performances need no description because fans know that anything less than superb is not in their DNA.

But the character development of Kay is remarkable.

She goes from a timid boss to a take-charge publisher leaving the all boys club of the day absolutely speechless.

Nevertheless, “The Post” does not provide any shock and suspense because students of history will know how the story ends as with all true historical dramas.

For a journalist, seeing the old printing presses of the early 1970s will be a blast from the past.

Furthermore, the work that the journalists at the Post provided emphasizes the important constitutional (First Amendment) role that the press plays by holding the government accountable for their decisions.

“The Post” shows that Nixon could not defeat the press and if Trump is intelligent he will see that he might suffer the same fate.