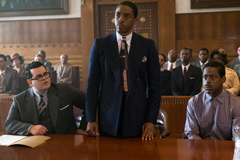 America Has to Do Better

Unfortunately, even in 2017 America still has to do better when it comes to race relations and ending systemic discrimination.

The court system is still stacked against African-Americans thanks to the 13th Amendment to the United States Constitution and Attorney General Jeff Sessions’ planned reemphasis on the war on drugs.

Police brutality seems at an all time high and the most powerful men in the country seemingly still want to keep African-Americans in “their place.”

Unlike critically panned biopics like “All Eyez on Me,” the biographical drama “Marshall” does not try to place Marshall’s dynamic life into two to three hours, but instead focuses on one particular gut-wrenching case that encapsulates what Marshall’s life and legacy were all about.

Boseman portrays Marshall, at the time the sole attorney for the NAACP.

The NAACP’s mission was to fight for wrongly accused African-Americans who faced imprisonment solely because of the color of their skin and an unjust judicial system.

Gad plays insurance attorney Sam Friedman who is forced to take on Spell’s criminal case because Marshall needs a Connecticut lawyer to sponsor him and because Judge Foster (James Cromwell, “W.”) will not allow the esteemed NAACP attorney to speak in his courtroom.

The only downfall of “Marshall” is that moviegoers will know going in whether Spell will receive a favorable or unfavorable ruling.

However, the outcome of the criminal case in “Marshall” is not the genius of the film.

The genius of the biopic is in Marshall’s quirky but confident and strong personality played to perfection by Boseman who seems to be the go-to Hollywood actor for African-American biopics.

Marshall even makes his Jewish legal counterpart Friedman carry his bags from the train station, a job that was almost exclusively held for African-Americans during those days.

But while Boseman favored James Brown in “Get on Up” and Jackie Robinson in “42,” he obviously looks nothing like the late great legal giant.

But looks can be deceiving and there’s more to life than meets the eye.

Boseman might not pass the Marshall eye test physically, but he passes the test as far as giving a stellar performance.

But the most profound cameos come during the final scene with appearances by civil rights attorney Benjamin Crump and the parents of the late Trayvon Martin, Sybrina Fulton and Tracy Martin representing the fact that the more things change for the African-American community the more things stay the same.

As Marshall stated, “The United States has been called the melting pot of the world.  But it seems to me that the colored man either missed getting into the pot or he got melted down.”