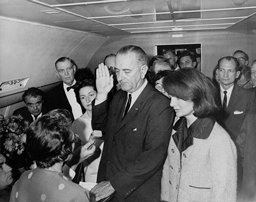 President Lyndon B. Johnson takes the oath of office after the assassination of President John F. Kennedy.

Senator Lyndon Baines Johnson (LBJ) always secretly held ambitions to become the president of the United States, but not like this.

Johnson once reigned as one of the most powerful men in the country as leader of the United States Senate.  But by becoming President John F. Kennedy’s vice president, the Texas giant became more like a figurehead.

Because of President Kennedy obvious close relationship with his brother Attorney General Robert F. Kennedy (RFK), LBJ did not even posses the power of the attorney general.

And being a staunch segregationist out of Texas for decades, Johnson did not even seem to agree with President Kennedy’s liberal integrationist agenda.

To be honest, Kennedy wanted to delay civil rights for Blacks and that is why he allowed FBI Director J. Edgar Hoover to find dirt on leaders like Martin Luther King, Jr. in an effort to stall the movement and discredit its leader.

Unfortunately, the film “LBJ” makes Kennedy appear to be more of a champion for civil rights than he actually was before his 1963 assassination.

Vice President Johnson definitely wanted Kennedy’s job but not because of an assassin’s bullet.

And the eventual president probably did not want his agenda to be civil rights and voting rights.  But Johnson was smart enough to realize that granting civil rights to African-Americans would inevitably happen.

He also knew that Kennedy was so popular to many that fighting for his causes would ease the turbulent transition after his assassination in Dallas by Lee Harvey Oswald.

Therefore, Johnson took the place in history reserved for Kennedy and the film “LBJ” attempts to capture that moment in time.

Unfortunately for Rob Reiner’s film “LBJ,” nothing new is learned from the movie if one is a history buff.

The film just gives a theatrical presentation of information provided ad nauseam in books and documentaries.

Woody Harrelson who portrays LBJ is almost unrecognizable with a believable Texas accent.

The wardrobes of the era are captured from First Lady Jackie Kennedy’s pink pillbox hat on that fateful day in Dallas.

The fear at Parkland Hospital in Dallas is palpable.

The Air Force One inauguration of Johnson is captured correctly.

And the animosity that existed between LBJ and RFK, which led to the younger Kennedy running for president in 1968, is reflected.

However, all of this is known without Reiner’s historical drama “LBJ.”

Johnson is one of the most important presidents in history especially in the African-American community because of his landmark civil rights legislation.

Unfortunately, all of these stories are told every year during Black History Month so they are known to the masses.

Reiner should have broken new ground, may be going back to Johnson’s childhood with flashbacks.

Flashbacks adequately capture his time as a powerful senator.

But more flashbacks could have shown why he was so demanding, brazen and vulgar.

The film does delve into Johnson’s relationship with the former First Lady Claudia “Lady Bird” Johnson, but that relationship is not focused on enough.

Johnson does deserve the biopic treatment, but not like this.

“LBJ” should have dug deeper and gotten a more intimate portrayal of the man who reluctantly became a titan for civil rights.