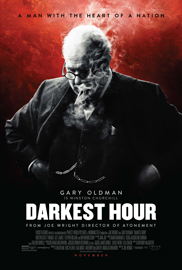 In the aforementioned “Dunkirk,” the story of British soldiers stranded on a beach with Nazi soldiers closing in on them is told from the perspective of the soldiers and the British civilian boaters who rescued them from almost certain annihilation.

On the other hand, “Darkest Hour” tells the story of the stranded 300,000 British soldiers from the perspective of Winston Churchill, the much-maligned British prime minister whose decree to the people of Great Britain saved the lives of those 300,000 stranded soldiers and prevented a Nazi takeover of that country.

While not as action-packed as “Dunkirk,” the film “Darkest Hour” is just as tense and terrifying, knowing what those British soldiers and politicians faced at the hands of the evil Adolf Hitler and his quest to fully occupy Europe and create a master race.

In the early days of World War II when Hitler’s Nazi regime had taken over France, Holland and Belgium, the good folks of Great Britain knew that their day of reckoning was soon upon them.

The British parliament had lost total confidence in its current Prime Minister Neville Chamberlain (Ronald Pickup) and they desperately searched for a replacement to guide them throughout the war.

However, Halifax did not think it was his time to lead his country.

Therefore, the job of prime minister fell to the controversial Churchill, almost by default.

In Great Britain at the time, Churchill had a reputation of making bad decisions during wartime and being drunk by breakfast time.

While Halifax and Chamberlain favored brokering peace with Germany and giving in to some of the Nazi demands, Churchill was always down for a fight despite the consequences.

The prime minister would rather go down fighting the Nazis and attempting to preserve Great Britain than to fall under the nefarious rule of Hitler.

Churchill devised the Operation Dynamo strategy that resulted in over 800 boats being sent to the beaches of Dunkirk to rescue the 300,000 stranded British soldiers.

In “Darkest Hour,” Oldman gives one of the best performances of 2017, depicting the drunk, temperamental and quirky behavior of Churchill.

What separates “Darkest Hour” from “Dunkirk” is that the former depicts how wartime affects the civilians back home.

“Darkest Hour” shows the stress politicians endure knowing that their decisions could lead to life or death.

The movie shows how even people with jobs right next to the prime minister are not immune to what is happening on the battlefield in another country.

Furthermore, the picture shows how infighting and backbiting in politics can potentially destroy a country and its people.

Unfortunately for “Darkest Hour,” the outcome of the film is known thanks to history books and “Dunkirk.”