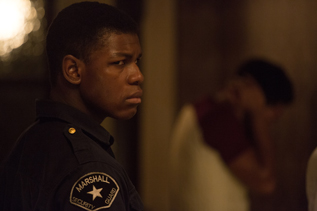 Fifty years after the Civil Rights Movement and the loss of countless martyrs, America still grapples with the weight of bigotry and hatred.

Fifty years later, police brutality often seems just as prevalent as it did in 1967.

Fifty years ago, one of the most viciously brutal and violent incidents of alleged police brutality occurred at the Algiers Motel in Detroit.

After 50 years, those that survived still feel the ramifications of that horrendous night.

The question 50 years later is does America care any more about the African-American community than it did in 1967 or do Black lives still not matter?

“Detroit” is an unbearable, difficult to watch and painful masterpiece by filmmaker Kathryn Bigelow (“Zero Dark Thirty” and “The Hurt Locker”).

The movie starts off in the powder keg of inner city Detroit at a time when the African-American residents were limited to living in certain neglected lower class neighborhoods.

In what should be a festive celebratory party that all Americans, regardless of color could appreciate, insensitivity leads to an all out riot, complete with looting and killings.

In the film “Detroit,” an African-American Vietnam War veteran has returned to the “Motor City” from a deployment in Asia to an illegal after-hours welcome home party at a business called Economy Printing.

Instead of understanding that the event is a private gathering to honor a war hero, Detroit police officers arrest many of the partygoers, even assaulting some of the revelers.

Upset at the constant harsh treatment by the local police department, many residents begin looting as a sign of protest against the constant unwarranted attacks by some police officers.

The riots lead to the deployment of the National Guard, Detroit city police officers and a local curfew.

Despite the upheaval in the streets, many African-American Detroiters are oblivious to the chaos outside their doors and are going about life as usual.

Larry (Algee Smith, “The New Edition Story”) from the legendary R&B group The Dramatics is anxious for his singing gig at the legendary Fox Theater.

Fred (Jacob Latimore, “Black Nativity”) works at the Ford plant, but his passion is managing the career of his friend, Larry and The Dramatics.

Dismukes (John Boyega, “Star Wars: The Force Awakens”) has two jobs, one of which is as a security guard.

Their lives intersect in devastation, when police officers believe they hear sniper shots coming from the direction of the Algiers Motel.

What happens at the Algiers, unfortunately, did not stay at the Algiers because the story of those who were there that night in 1967 is similar to so many stories that grace the headlines in 2017.

Unfortunately, movies like “Detroit” and “Fruitvale Station” are still extremely necessary and very relevant even to this day.

Obviously, Bigelow’s film features classics songs from Motown Records legends like The Temptations, which is kind of ironic.

To the world, Detroit probably seemed like a glamorous place where African-Americans went to get stable jobs or to become superstars in the music industry.

Unfortunately, the city was just as turbulent as any city in the South during the 1960s.

The fear, pain and desperation felt via the tears of Larry, Fred and others is a fear that African-American men still have to battle with everyday when they encounter some law enforcement officials.

One can work two jobs, serve America in the military or have dreams of fame and still take a bullet just for being Black.

Unfortunately, 50 years later, things have not gotten much better for African-Americans in the so-called land of the free.