Savages Movie Good, But Not for Everyone 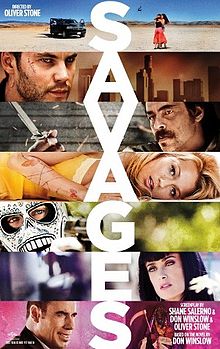 If brutal violence, drugs and promiscuity are not your thing, then the Savages movie is not your cup of tea.  However, for many men, and some women, watching a gangster movie is like heaven and the Oliver Stone directed Savages movie does a good, but not great, job of continuing the genre’s lore amongst filmgoers.

The Savages movie begins on the shores of Laguna Beach, Calif. and centers on two friends, Chon (Taylor Kitsch) and Ben (Aaron Johnson), and their shared girlfriend “O,” played by Blake Lively.  “O” is attracted to both for different reasons.  Ben is sensitive and passionate, while Chon is rough and aggressive after completing two tours of duty in the Iraq War.

Like many young adults, the nine-to-five thing does not fit the personality of Chon and Aaron, and they begin smuggling in marijuana from Afghanistan.  Their crew begins making so much money that they gain the attention of the brutal Mexican drug cartels who want in on the business.

Ben wants to compromise with the cartel, which is led by Elena (Salma Hayek), but Chon realizes the savagery of the cartel and believes violence is the best policy for survival.  Elena has a way of making people comply to her wishes in the form of her vicious henchman Lado (Benicio Del Toro) who has a fetish for beheadings and dismemberment of other body parts.

When Ben and Chon are hesitant to comply with Elena’s demands, she hits them in the heart by kidnapping the love of their lives, “O.”  Although initially reluctant to go along with the business deal, the two realize they have to play hardball in order to save “O” and possibly save their own lives as well.

The filmmakers do a good job of humanizing the ruthless Elena, if that is even possible.  We learn that she is forced into the violent drug business after the murder of her husband and we also find that she has a weak spot, and that is her daughter Magda.

While in captivity, “O” and Elena are able to form somewhat of a bond, because she is around the same age as Magda.  Elena even begins offering motherly advice, warning her of the danger of being involved romantically with two close friends. However, she warns “O” that even though she enjoys her company, she will still cause bodily harm to her two boyfriends.

As in all gangster films, Elena has to worry about rats and the possibility of infiltration by other cartels, like El Azul (Joaquin Cosio) and police officers like Dennis, played by the legendary John Travolta.

Despite the brutality of the Savages movie, it is a pretty good film even though gangster films usually follow the same pattern.  What makes it good is the vicious violence, which will also make it unbearable for some moviegoers.  And although the film is very hip, the Savages movie suffers from a somewhat corny ending.

The story epitomizes the cliché “you are a product of your environment,” and “only the strong survive,” because it turns the peaceful into the violent and proves that “survival of the fittest,” refers also to the savageness of human beings and not just wild beasts.