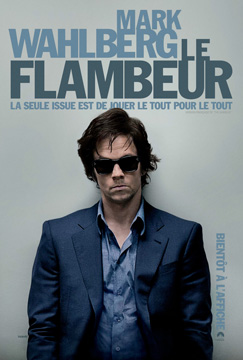 Musicians like The Beatles, Whodini, Ralph Tresvant and Blackstreet had more prophet in them than many people give them credit for.

Although we live in a society that promotes materialism, the aforementioned artists at one time in their career uttered the most profound statement on the human condition, which is “money can’t buy me love.”

In “The Gambler,” Jim Bennett (Mark Wahlberg) is born with a silver spoon in his mouth.  Unfortunately, silver sometimes rusts and it does not compare when your relatives are eating with gold and platinum utensils.

His family comes from wealth.  One of his great grandparents even founded a lucrative bank meaning money is no object to his affluent family.

However, when his grandfather dies he does not leave millions to his grandson like other tycoons.

Like common folk, Jim is forced to make his way in this world on his own two feet.

Unfortunately, his two feet usually lead him to the underworld of gambling halls and eventually a debt of $240,000 that he has to pay off in seven days.

Though one has successful relatives, it does not mean success will come easy to their offspring.

Furthermore, when one comes from an extremely successful lineage, it is sometimes impossible to find one’s own identity apart from the family reputation.

Jim’s novel was a bust and he is forced to take a job as an associate professor at a local university.

An associate professor sounds like a distinguished profession but Jim hates it and his hatred is taken out on his students everyday.

Instead of actually teaching them or encouraging them to pursue their dreams, he is a dream killer telling them that most will be unsuccessful in life.

He teaches them that success is reserved for the ultra-talented and super-intelligent, and that the others can possibly find meaningful work in other areas because the world never has enough electricians and other blue-collar workers.

To pay off the debt, Jim has to seek money from his estranged mother or local gangsters charging an excessive amount of interests.

His only problem is that he cannot hold onto money because of his gambling addiction, which threatens to destroy his family, his life and his career.

“The Gambler” is more about a call for help.

Although Jim has a crippling addiction, his addiction is his way of rebelling against an unfair life that has not been kind to him and his dreams.

“The Gambler” is a heavy film about despair, despondency, dependency and ultimately a desired departure from life and its stress, expectations and responsibilities.

The controversial Wahlberg delivers his usual stellar performance in “The Gambler.”

However, the star of “The Gambler” is Michael Kenneth Williams who plays Neville Baraka, his stereotypical typecast gangster character.

But in this film, Williams’ character has a cerebral and intellectual side to his menacing exterior and he plays it to perfection.

Unfortunately, the film has its awkward moments like the visual countdown of days leading Jim’s “D-Day” with his various unhappy loan sharks.

Furthermore, the film could have used a more creative conclusion than the one chosen, which harkens back to the strange conclusions of Spike Lee films in the 1980s and 1990s.

Regardless, the film succeeds because it does not simply portray people’s problems it dissects how people arrive at their problems and the difficulty of breaking loose from the chains of life’s pressure.  It shows that no matter what stock a person comes from or how much material wealth they have at their disposal, life becomes disposable when one only looks to money and worldly success as the true measure of a man.