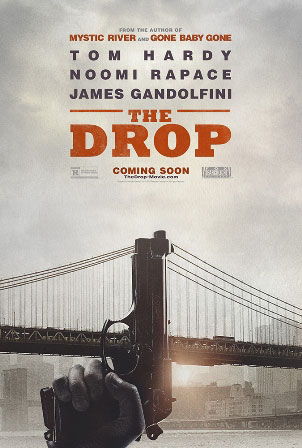 Sure, the outside world sees a façade of success and prosperity, but behind closed doors the devil owns you, your business, your cash flow and your destiny.

At one time Cousin Marv (James Gandolfini) was someone in his Brooklyn neighborhood.

People feared and respected him and his name meant something on the streets.

Unfortunately, bad business deals, sick parents and gambling debts leads to his bar being taken over by a group of gangsters who use Cousin Marv’s bar as one of many locations to drop off their profits made from illegal business tactics.

No one ever knows when their business will be used as the drop, but when one’s number is called they must answer the call or deal with the consequences and repercussions.

When Cousin Marv’s is robbed one evening, the perpetrators make off with over $5,000.

Despite the unfortunate circumstances, Marv and Bob (Tom Hardy) have to come up with the lost money or wind up lost themselves.

In “The Drop,” Bob seems lost in the underworld of organized crime.  All he wants to do is tend the bar at Cousin Marv’s and take care of his pit bull puppy Rocco, but because of the robbery he finds himself in the crosshairs of a gangster’s ire.

For a lack of a better term Bob is slow.

He gives investigators too much information when probed.

He sees more than he should.

And he doesn’t show enough fear of the gangsters running the neighborhood, which often brings out the sarcasm in Cousin Marv.

“The Drop” is more than just dropping off illegal money at local bars.  It is a story about survival of the fittest.

“The Drop” is about making money and a life for yourself, no matter the consequences and no matter who has to be disposed of in the process.

It is a film that shows that one’s reputation means everything on the mean streets for better or worse, and survival can come down to fear and respect.

Hardy continues to add to his list of spectacular film performances.  He has a Denzel Washington type style on camera, because he seems to never churn out a subpar performance.

When “The Drop” seems to drag at the beginning, which it does, his humanizing performance of Bob and all of his shortcomings intellectually make up for the slow pace.

Nevertheless, the slow pace in the beginning is the only thing that should have been corrected in this film.

Although too much time is spent on Bob’s relationship with Rocco, stellar performances by the entire cast make up for that mistake.

Furthermore, all thrillers have plot twists but the many twists in “The Drop” come out of nowhere.

Gandolfini picked the perfect role because unfortunately “The Drop” was his final film performance.

Despite the talent on the screen, Hardy is the star amongst stars.

Because of his family ties to Cousin Marv he is never completely safe from evil, but sometimes the devil lives closer to us than we actually think.