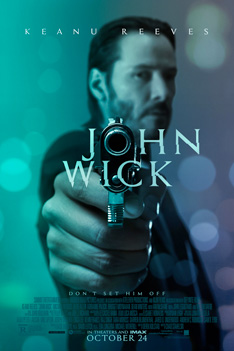 It Feels Good to be a Gangsta

In the classic song “D*** it Feels Good to be a Gangsta” by the Geto Boys, Scarface epitomized what it took to be a gangster.

Writer Derek Kolstad must have channeled his inner-Brad Jordan (aka Scarface) when he wrote the screenplay for “John Wick” and developed the personality of the title character because John does not look for trouble and he does not talk much.

John (Keanu Reeves) is an ex-hit man who desperately desires to live the normal life.

He marries the love of his life and settles into the family life in a suburban home, but as all gangster movie gurus know once one is in the game, it is almost impossible to check themselves out of an on-going game.

Furthermore, it is definitely impossible to change long-established rules to the game of organized crime.

When John’s beloved wife dies, it turns his world upside down.

She was the only person that ever taught John what it meant to love someone and he is lost without her.

He spends much of his time daydreaming of happier times with his better half and the years that he will never get to share with her because of her untimely demise.

Knowing that she does not have much time left, John’s wife arranges for John to have an adorable dog fill the void that she left in his life.

Although a dog could never replace true love, it could teach John to love again after such a devastating loss.

Unfortunately, John is not in the right mental state to endure many more losses and when intruders steal his car and kill his dog, the old John Wick that had attempted to bury his old life before he buried his wife, rises from the grave but not for holy purposes like Lazarus.

John Wick’s rise from the grave epitomizes something more sinister from a man who so desperately wanted to distance himself from his past sins and past gangster ties.

Reeves has definitely never been Hollywood’s best actor but he does just enough to bring honesty, rawness and empathy to the character John Wick.

He simply wants to mourn the loss of his wife and enjoy time with his dog, which is his last gift from her, and live a nice quite life in the suburbs but youngsters who are new to the game will do anything to make a name for themselves, even if it means challenging the “untouchable” John Wick.

Lance Reddick does a splendid job of exuding the cool and calm African demeanor in his role as Charon, the hotel manager.  Charon never loses his smooth swagger despite the chaos going on around him.

“John Wick” is only predictable as it pertains to John’s friendship with Marcus (Willem Dafoe).

Additionally, more screen time could have been given to film veterans like Dafoe and John Leguizamo (Aureilo).

But John Wick is a true gangster, and real gangsters play by their own rules.

As the Geto Boys (J. Prince) said, “So voters of the world keep supportin’ me and I promise to take you very far.  Other leaders better not upset me or I’ll send a million troops to die at war…d*** it feels good to be a gangsta.”