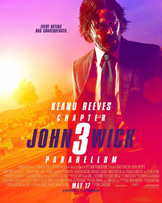 Best ‘Wick’ of All

Some say that things happen in threes, for better or worse.

Simply put, “John Wick: Chapter 3—Parabellum” has officially separated itself as the best of a franchise that represents gritty and gruesome greatness.

In “John Wick: Chapter 2,” the titular character, played by Keanu Reeves, has broken all of the rules of the High Table.

Consecrated hotels like the Intercontinental in New York exist as a safe haven for assassins like John.

Sanctuaries like the Intercontinental Hotel exist to provide a respite for killers so that they do not have to look over their backs at all times.

The Intercontinental Hotels provides much needed rest and relaxation for some of the most brutal people on the planet.

Despite the clear-cut rules at the Intercontinental Hotel, John disregards those rules and kills someone on hotel grounds, which turns him into persona non grata as far as the High Table is concerned.

In addition to getting himself in hot water, John manages to bring disciplinary action against all of his comrades who assisted him in breaking the rules.

As a result of his rule breaking murder on the grounds of the Intercontinental Hotel, John will face excommunication from the High Table.

The leaders of the High Table have placed a $14 million bounty on John’s head and after a certain period of time no one can assist the excommunicated hit man or face death too.

Those who have assisted John in breaking the rules in the past will receive a visit from The Adjudicator (Asia Kate Dillon) advising them to get their affairs in order before it is too late.

Furthermore, once the time is up and John’s excommunication really becomes official, no one can even really talk to him or face discipline.

Additionally, at that point the bounty goes up to $15 million.

Sure, he can kick behind like he has done in every previous movie.

And trust me, John handles his business with his fists, knives and guns like no other.

But one man, even if it is indeed the infamous and legendary John Wick, trying to fight off an entire organization of hit men still has about a 50/50 chance of surviving the bounty as Intercontinental Hotel concierge Charon (Lance Reddick, “Bosch”) puts it.

John will still need assistance from some of his closest friends if he is to escape the reach of the High Table.

However, reaching out to his friends could get them excommunicated or executed as well.

In “John Wick: Chapter 3—Parabellum,” the walking dead, if the High Table gets its wish, also known as John Wick, finally finds some much-needed help in a couple of former allies turned adversaries.

The Director (Angelica Huston) who has known John since he was a Belarus orphan helps him escape to Casablanca where he hopes to get the ultimate help that he needs to survive.

Obviously, The Director does not want to help John because of the death sentence it might bring her.

Nevertheless, she honors his wishes because he has a ticket that he has not cashed out.

The Director helps John find safe passage to Casablanca where his life is no safer than it was on the mean streets of New York City.

Finally, John finds one more person that will help him in his quest to survive.

Sofia (Halle Berry) helps John get a meeting with The Elder of the High Table.

The Elder (Said Taghmaoui) has seen how John has escaped death and thus far survived his excommunication.

However, if John wants the bounty removed from his head and get welcomed back into the organization, The Elder has one more mission for him to fulfill.

He has to kill one more person or get killed himself because refusing to honor a marker from a member of the organization will cause consequences and repercussions.

First of all, “John Wick: Chapter 3—Parabellum” is to die for, literally.

“John Wick: Chapter 3: Parabellum” is the bloodiest of the trilogy.

However, “John Wick: Chapter 3—Parabellum” is also the best.

The third installment of the “John Wick” franchise is the most gruesome.

But the film is also the greatest of them all, so far.

So far because “John Wick: Chapter 3—Parabellum” would indicate that Chapter 4 will come sooner or later, hopefully sooner.

The only criticism of “John Wick: Chapter 3—Parabellum” is that it might be too graphic and brutal at times.

Audience members sometimes had to turn away from the screen as to not see a knife go through the eye of some helpless John Wick victim.

And although the titular character is obviously a “baaaad man” to quote ESPN’s Stephen A. Smith, his female colleague played by Halle Berry is a “baaaad woman.”

Sofia is just as fearsome as her male partner and she has some fearsome dogs to back her up when she finds herself in a predicament.

For some reason, Sofia has trained her dogs to attack men where the sun does not shine.

The part of the male anatomy that the dogs attack is another reason to briefly look away if you are a man.

Marjanovich’s acting is adequate and his fighting skills are above par for someone so gigantic (7’3).

When The Adjudicator threatens him with his punishment he scoffs at her threats and subtly makes a few veiled threats of his own.

But what works for “John Wick: Chapter 3—Parabellum” the most is its unexpected twists and turns.

Without the plot twists, “John Wick: Chapter 3—Parabellum” still would have been the best of the trilogy.

With the plot twists, “John Wick” fans will salivate for Chapter 4.

Recently, Reeves made headlines because he said he knows what happens when humans die.

But based on the performances of “John Wick: Chapter 3—Parabellum,” the gangster flick franchise shows no signs of a demise anytime soon.

Apparently, the third time really is the charm.