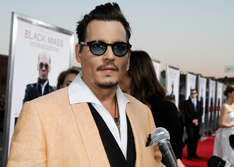 Snitches sleep with the fishes.

In organized crime, clichés about snitching and the consequences of snitching are legend just like the legendary mob bosses that lived by the code of not talking to authorities.

However, it is always funny how those same mob dons ignore the art of keeping silent when their behind is on the line.

When someone else snitches, they have committed a capital crime.

But when former kingpins like Nicky Barnes, Frank Lucas and James “Whitey” Bulger cooperate with an investigation, it is not snitching all of a sudden.

Like “Whitey” (Johnny Depp) states in “Black Mass” it is an unholy alliance with the FBI, not a form of snitching that he is engaged in.

Initially, “Whitey” Bulger is just a local Irish Boston thug, but no kingpin like the leaders of the Angiulo crime family, which is a part of the Italian mafia.

Bulger’s Winter Hill Gang is like an Irish family though, terrorizing South Boston and controlling the numbers racket and other illegal businesses.

Nevertheless, the FBI still wants to see him behind bars but not as much as they want to see the Italian mafia dismantled.

Trying to bring down Cosa Nostra (our thing/our family) can make for some strange bedfellows as the FBI gets into bed with “Whitey” and his comrade Steve Flemmi (Rory Cochrane) to help bring down the Angiulo family.

The Angiulos are invading the Winter Hill Gang’s turf and inflicting violence on the gang from South Boston, so when “Whitey’s” childhood friend John Connolly (Joel Edgerton) joins the FBI and begins to investigate the Angiulos, “Whitey” becomes an all-too-eager informant against his adversaries.

In “Black Mass,” John offers “Whitey” the opportunity to operate the Winter Hill Gang with impunity as long as they avoid drugs and murder in exchange for his testimony against the Angiulos.

However, when “Whitey” does not keep his end of the bargain and John becomes too indebted to “Whitey,” everyone’s freedom is in jeopardy.

To make matters worse, “Whitey’s” brother Billy Bulger (Benedict Cumberbatch) is Massachusetts’ most powerful state senator, and involving him in the FBI’s business with “Whitey” could ruin his reputation and threaten his career.

“Black Mass” is told in rat or snitch form.

That is, it is told from the perspective of eyewitness testimony from within the Winter Hill Gang.

One by one, “Whitey’s” soldiers begin waving their white flags in surrender, in order to obtain a favorable sentence in exchange for their testimony against him.

Although it is early for the award season, Jason Mitchell (“Straight Outta Compton”) has some serious Oscar competition from Depp in “Black Mass.”

Depp is sinister, evil, psychopathic, heartless, cruel and amoral in his performance in “Black Mass.”

He is almost unrecognizable if one did not already know he was starring as the leader of the Winter Hill Gang.

He has “Whitey’s” signature rotten tooth, and all of the actors are totally convincing with their Boston accents.

“Black Mass” even attempts to show “Whitey’s” human side, but the evil far outweigh the benevolent side in his cold soul.

Unfortunately, for anyone familiar with “Whitey” Bulger’s story, “Black Mass” will seem more like a review than a pop quiz.

Furthermore, it would have been great for the film to include more of “Whitey’s” time on the run before his arrest and incarceration.

Nevertheless, this tale of snitching might be one of the best films about one of America’s most notorious snitches.

And hopefully, this review did not snitch too much on how good a film “Black Mass” actually is.