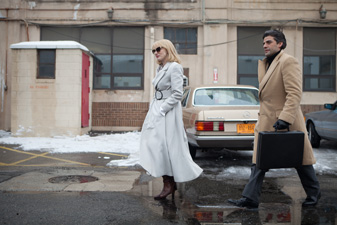 Jessica Chastain (left) and Oscar Isaacs shine in “A Most Violent Year” (Photo Credit: A24 Films).

Sometimes trying to live life righteously does not mean that unrighteousness will not show up at one’s doorsteps.

In “A Most Violent Year,” Abel Morales (Oscar Isaacs) is determined to live the American dream without resorting to crime and corruption to achieve it.

He has a successful business called Standard Heating Oil, a new mansion as well as a beautiful wife Anna (Jessica Chastain) and children.

Furthermore, he has plans for expansion, which undoubtedly makes his competitors jealous and envious of his progress.

While being investigated by district attorney Lawrence (David Oyelowo), Standard Heating Oil truck drivers like Julian (Elyes Gabel) begin getting robbed at gunpoint for the oil contained in the tucks, worth thousands of dollars.

The loss of revenue and the violence of the oil industry make it increasingly difficult for Abel to move forward with his plans for expansion.

Abel is forced to take desperate measures to avoid a total collapse of his business while also trying to remain on the right side of the law despite the violence that he is faced with.

“A Most Violent Year” takes place in New York City in 1981 and totally feels like the East Coast.

One can almost feel that grittiness in the opening scene as Abel jogs the New York streets as Marvin Gaye’s “Inner City Blues (Make Me Wanna Holler)” provides the pulsating soundtrack.

Abel’s strength epitomizes the stereotypical strength of a New Yorker, but he has the morality and idealism of one from the South or the Midwest.

He desperately wants the finer things, but even more desperately does not want to stoop to the level of the other “gangsters” also known as entrepreneurs that dominate the heating oil business.

However, Anna’s mentality symbolizes another legendary former New Yorker in Malcolm X whose mantra was by any means necessary.

Anna is determined to stay at the top legitimately or illegitimately, much to the dismay of her upright husband.

Isaacs, Chastain and Oyelowo are fascinating in their performances in “A Most Violent Year,” but the performance that steals the show is Gabel’s portrayal of Julian.

In a city and industry in which only the strong survive, Julian idolizes his boss Abel but does not have the intestinal fortitude to survive in the dog eat dog world in which he lives.

His weakness is a detriment to Abel’s company and could be the nail in the coffin for Standard Heating Oil.

“A Most Violent Year” is a gripping film with a unique storyline, but filmmaker J.C. Chandor should have utilized Oyelowo more in the movie.  His talent is really on display with the release of “Selma” and it would have been great to see more of his versatility in “A Most Violent Year.”

Nevertheless, “A Most Violent Year” is a movie that one can almost feel.

The cold, wintry shots are superb to go along with superb acting by the stars especially Gabel.

One begins to empathize with the characters as they struggle to remain strong in an environment that is constantly trying to expose their weaknesses.  Working and living under that type of pressure requires one to be extremely righteous when dealing with unrighteous enemies.