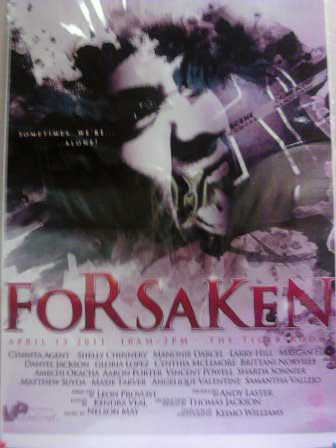 Forsaken is a feature film produced by the students and faculty of Texas Southern University (Samantha Vallejo/Regal Magazine).

The Transition: From Music to Film– this documentary directed by Keimo Williams’s details the cultural quilt woven by the music and film industries. It features an interview with famed music video director Dr. Teeth and other Texas Southern University (TSU) professors. Dr. Teeth laid out a blueprint on how to become a successful filmmaker by having a strong knowledge of film history. The film was very informative. It then took a hilarious turn with the mini-spoof entitled Money Mac. The documentary touched all aspects of rap along with the cultures from California to Texas to the East coast.

Love Languages: This short film directed by Kristopher Vanburen showed how two people can interact with one another through creative avenues. It displayed a courtship, if you will, without barriers via Sharpies and Post-It Notes. Vanburen is a natural talent. The overall message of the short film is a tear-jerker for all.

Forsaken: This film details a typical college girl who is ridiculed by most of the student body. This one was a bit confusing maybe due to the title of the film being a misnomer. It seemed as though there was more drama than the actual telling of the story. The acting was not believable to be considered a real whodunit.

Still Born: This film depicted a schoolteacher on the search for one his students who is constantly absent. Little does he know that the student lives in an impoverished neighborhood where he has to sell drugs just to get by while his mother trolls the streets as a prostitute. It truly showed the real “hood,” the inner workings of this Black community within its black and white backdrop. The film was very gritty and has suggestive adult undertones. The scene where the mother overdoses on heroin was truly heartbreaking. The heroin symbolized her escape from the harsh realities of her life. It was the type of film that should be shown at the Sundance Film Festival.

Apollo: This film depicts the story of man who was too consumed with work to even attend church with his family. He has an apparent heart attack, dies, and goes to Heaven while his family moves on without him. The twist was that it was all a dream which brings him a reality check that family comes first. However, the mini music video was irrelevant to the film.

All films will air in the Greater Houston area on TSU-TV (Comcast on Demand).