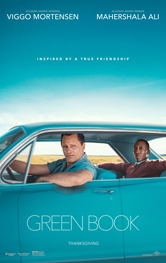 Black is not the New Green

Since the first Africans arrived in America shackled to slave ships and stripped of their humanity, this country has never allowed Black people to be green.

Green cannot describe any sane Black American because America constantly lets Black people know their “place” in life, no matter if you are a gifted classical pianist with several doctorate degrees.

To America, Black people are still niggers and the new movie “Green Book” does an exquisite job of putting a mirror up to America and exposing its racist flaws, while also showing how true friendship can heal some of society’s bigoted ills.

In “Green Book” which begins in 1962, Don Shirley (Mahershala Ali, “Moonlight”) would fit America’s prejudiced description of an uppity Negro.

While many Black Americans struggle for success and a livable wage, Dr. Shirley lives a life of material luxury.

His career as a classical pianist has garnered him many fans in the Tri-State area.

He has an apartment over Carnegie Hall adorned with regalia, mementos like elephant tusks, African garb and a throne so that he can rest on his laurels and accomplishments.

He has several doctorate degrees and is the epitome of class, sophistication and royalty.

On the other hand, his future friend Tony Lip (Viggo Mortensen) is the exact opposite.

The Italian-American native of The Bronx, N.Y. is the stereotypical Italian tough guy with ties to the Mafia.

Lip has a decent job working as a bouncer at the Copa Cabana and has a reputation of being no-nonsense.

When customers at the Copa get a little unruly, Lip often gives them a few punches across their lip and any beefs are immediately settled.

However, when the Copa shuts down for a couple of months for renovation, Tony Lip’s money obviously dries up.

Tony Lip’s forced sabbatical could not have come at a worse time.

His home with his wife Dolores (Linda Cardellini, “Daddy’s Home”) is falling into disrepair.

And Christmas is right around the corner.

Not being able to afford presents for their two sons would be catastrophic for the family.

But when Tony Lip receives a job offer as a chauffeur for a New York “doctor,” he jumps at the opportunity to put some much-needed money into his dwindling bank account.

The only catch is that Dr. Shirley is not actually a medical doctor.

As Lip tells Dolores, he must be a doctor of pianos or something.

And the job will require Tony to work as Shirley’s driver on his music tour throughout the Deep South and Midwest, at a time when segregation was the law of the land and different races had distinct roles in society.

Sure, seeing a Black man drive around his White boss was the norm back then, just look at Morgan Freeman in “Driving Miss Daisy.”

But there are no movies called “White Boy Driving Dr. Negro” playing at the box office.

The job pays well, but Lip’s family lets him know that he would not last long being a Black man’s servant.

Tony does not even want to keep two glasses after two Black men, working on the house, drink out of it.

So to become subservient to a Black man is totally out of the question.

But what is even more out of the question is watching his family struggle financially for two months.

Before embarking on the tour of the Deep South, Dr. Shirley’s record label gives Tony Lip the green book.

The green book lists businesses like restaurants and hotels and motels that are welcoming to Black Americans down South.

As a Black American in 1962, being at the wrong place at the wrong time could become a life or death situation.

Because of that grim reality, Tony’s job is not just making sure Dr. Shirley gets to his gigs on time.

Tony Lip’s reputation on the streets is the main reason he got the job, because he might have to become Dr. Shirley’s bodyguard if they run into some bigots who want to make an example of the uppity Negro who refuses to speak slang, listen to pop music or play the piano if it is not a Steinway piano.

On the contrary, if Dr. Shirley represents class personified, his new chauffeur/gopher is everything except classy.

Tony Lip is a greedy and messy slob who has no room for etiquette and cleanliness.

If cleanliness is next to godliness, then Tony Lip is deep in the depths of Hell.

Nevertheless in “Green Book,” a true friendship develops between Tony Lip and Dr. Shirley, which changes how both men view people and the world around them.

People can be one thing one day and then totally transform based on what they experience.

Tony Lip is a racist hoodlum who has no reason to look down on Black Americans like Dr. Shirley.

But American society has instilled in many White Americans that their skin color makes them superior.

White Americans can have ties to the Mob, but some think they are superior to Black people with advanced professional degrees.

A White American can be poor, but still somehow believe that they are better than an affluent Black person.

And a White American can be subservient to a Black person, but still convince himself or herself that they are superior.

But people can also change for the better.

Actually interacting with people who look differently will teach everyone that their preconceived notions might be nonsense.

On the other hand, Black Americans can be the best at their profession.

Black Americans can have countless admirers and be treated like royalty especially if they are performing for predominantly White audiences.

But as soon as the leave the stage, those Black performers become just another nigger to the same fans that were previously admiring their work.

Furthermore, affluent Black Americans have the problem of not being Black enough when they are around people from their own community.

And Black people like Dr. Shirley constantly deal with the pressure of presenting the best face of Black America in order to open doors for future generations.

That reality makes it impossible for any Black American to be green as in gullible.

But the movie “Green Book” should produce a lot of green as in money if American moviegoers have good taste because the movie shows how people can come together if they take the time to listen to each other and empathize with their plight.