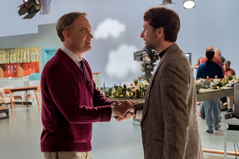 “A Beautiful Day in the Neighborhood” does not qualify as a Mister Rogers biopic.

The movie qualifies more like a moment in time like the Obama movie, “Southside with You,” that detailed the early relationship of former President Barack Obama and former First Lady Michelle Obama.

But “A Beautiful Day in the Neighborhood” fulfills a higher purpose than just another Hollywood biopic.

“A Beautiful Day in the Neighborhood” represents a much-needed dose of positivity and forgiveness, something very necessary considering today’s political and social climate.

The film “A Beautiful Day in the Neighborhood” centers on the real-life relationship between Fred Rogers (Tom Hanks, “Bridge of Spies”) and Esquire Magazine journalist, Lloyd Vogel (Matthew Rhys, “Burnt”).

In “A Beautiful Day in the Neighborhood,” Lloyd should have everything that would guarantee a happy life.

He has a great job writing for Esquire Magazine.

The young couple has started a family.

Lloyd’s sister has decided to get married, AGAIN.

When Andrea asks Lloyd if he is going to his sister’s wedding, he replies that he goes to her weddings every year.

But what makes him apprehensive about this year’s nuptials is the fact that his father Jerry Vogel will walk his sister down the aisle.

Jerry has had an estranged relationship with his children over the years.

Therefore, there is no guarantee that Lloyd and Jerry will behave at the wedding ceremony.

Let’s just say that the wedding does not go off without a hitch, as the newlyweds would have hoped.

Lloyd’s beef with Jerry goes back to his childhood and the way Jerry treated Lloyd’s mother.

Although Lloyd’s life turned out better than O.K. despite his turbulent childhood, the scar tissue left behind from his parents’ toxic relationship still tears at Lloyd’s heart.

The past tears at Lloyd so much that it affects his career, his marriage, his parenting and his overall life in general.

Despite not having an ideal relationship with his father, at least Jerry is still living.

And Jerry desperately wants to reconnect with Lloyd and mend their broken relationship.

Furthermore, if his family life is frustrating, Lloyd’s work life has become just as frustrating.

Lloyd has made a name for himself as an investigative journalist.

And although Lloyd is good at his craft, he has created some enemies amongst the people he interviews for his investigative pieces.

As a result, his boss has given him a quick fluff piece for the heroes’ edition of Esquire Magazine.

Nothing is more offensive to an investigative journalist than getting a fluff piece as an assignment.

Lloyd’s assignment is to interview Mister Rogers, the beloved television personality who caters to kids and relies on kindness in the midst of life’s difficulties.

To put it bluntly, Lloyd has no desire to travel to Pittsburgh to interview Mister Rogers.

But, what choice does he have?

He has a wife and kid to take care of.

Therefore, he reluctantly takes the assignment.

Therefore, when Lloyd shows up on the set of “Mister Rogers’ Neighborhood” looking like he jumped into the boxing ring with Mike Tyson, Mister Rogers begins asking questions about Lloyd’s life.

During their emotional interview sessions, Mister Rogers is able to break through the tough façade that Lloyd puts up, helping him repair relationships and his outlook on life in the process.

“A Beautiful Day in the Neighborhood” is positive, forgiving and sometimes very peculiar.

Mister Rogers is such a good and kind person that he comes off as very weird in a world that does not value his attributes.

The world can probably relate more to Lloyd.

Although he has superficial success in life with his career, he does not have happiness.

Lloyd’s unhappiness stems from beef with his parents, which many people can relate to.

People can hold grudges for decades, even if the person that did them wrong makes an effort at reconciliation.

Furthermore, Lloyd is living proof that happiness and joy in life does not come from a job, money or a relationship.

If one has beef with a close family member, nothing can replace that person or their love in a person’s life.

“A Beautiful Day in the Neighborhood” is like something never seen before from a major motion picture.

The movie comes across as an episode of “Mister Rogers’ Neighborhood” with viewers getting a chance to see behind the scenes footage.

“A Beautiful Day in the Neighborhood” presents Lloyd’s dilemma in a way that Mister Rogers’ adolescent audience would understand and relate to.

But the universal message of love, acceptance, forgiveness and understanding are timeless, timely and for all age groups.

As a matter of fact, older audiences need the message from “A Beautiful Day in the Neighborhood” more than younger audiences.

From an acting standpoint, Hanks does a superb job of embodying Mister Rogers.

He is soft spoken.

He is not of this world, basically.

He shows no venom.

He shows no hatred.

And he holds no grudges.

But “A Beautiful Day in the Neighborhood” does not try to sugarcoat Mister Rogers’ human qualities.

His wife Joanne Rogers (Maryann Plunkett) informs Lloyd that “Rog” is not a perfect soul.

He has a temper.

He just works on not losing his temper.

Not sainting Mister Rogers makes “A Beautiful Day in the Neighborhood” an effective film, meaning all people can achieve his level of humanity.

But despite the effectiveness of “A Beautiful Day in the Neighborhood,” it still is a weird biopic.

Actually, it is not a biopic at all.

It is more of a call to action that adults need more than the kids from “Mister Rogers’ Neighborhood.”