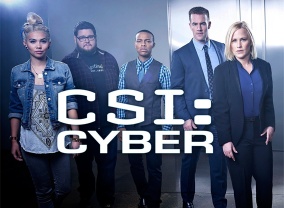 But more of “CSI: Cyber” can be yours with the release of the show’s final electrifying season on Blu-ray and DVD.

“When confronted with old enemies, secrets and lies, the team must work together to unravel webs of evidence and solve some of the most bizarre cyber attacks yet.”

In the first episode of the last season, the team in “CSI: Cyber” investigate the disappearance of Scott Barrett in Washington, D.C.

His housekeeper says that he is out of town, but his cracked and bloodied cell phone is still at home.

To make the story even stranger, his home alarm system has been disabled electronically and investigators can find no forced entry or evidence of entry.

The team in “CSI: Cyber” almost immediately know that a black hat hacker is probably responsible for the disarming of the security system and subsequent crimes.

The black hat wants to frame the security system company into paying him for exposing their flaws, but when the crime gets out of hand, the hacker faces more consequences than he ever envisioned.

Nelson (Moss) is able to use high-level technology to track down the man responsible for Scott’s mysterious disappearance.

Like every episode of “CSI: Cyber,” the technology used to solve unresolved crimes is extremely fascinating and at times frightening.

That fascination is prevalent in every episode of this hit series.

The DVD and Blu-ray collection includes bonus features like a gag reel, deleted scenes, Behind the Firewall: Season 2 of “CSI: Cyber,” Hack My Ride, Mr. Russell Goes to Washington, Pixel Perfect and the Sounds of Cyber.

The only fault of “CSI: Cyber” is that the storylines might be over the heads of those who are not mesmerized by technology.

However, for those interested in the next level for technology, “CSI: Cyber” is a must have for one’s collection.

That way, “CSI: Cyber” will last forever even though it is no more in a traditional sense.