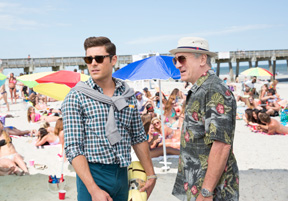 Forgive me, as I get personal for a moment because I never met my grandfathers.

I have heard certain adjectives used to describe Warren and Cornelius like wise, hard working and strong.

So the film “Dirty Grandpa” amused the hell out of me.  But it also ruined any positive image that I have for grandfathers because now the image I have is of male-whores who pleasure themselves and perform karaoke to Ice Cube’s “It Was a Good Day.”

In “Dirty Grandpa,” on DVD and Blu-Ray May 17, Dick Kelly (Robert DeNiro) has just buried the love of his life.

Although his wife battled cancer for years, Dick stayed by her side until her dying day.

For over 40 years he stayed faithful, even if it meant going celibate for 15 years as she battled the dreaded “C” word.

However, a day after putting his wife into the ground, he convinces his grandson Jason (Zac Efron) to take a road trip with him to Boca Raton, Fla. to play golf because he took a trip there with his wife every year around that time.

Dick also admits to Jason that his grandmother wanted him to get back on the saddle if something happened to her.  Therefore, he is determined to live life to the fullest because that is what she would have wanted.

The only problem is that Jason has a very demanding job as a corporate lawyer overseeing SEC compliance and LLC agreements.

Furthermore, he is getting married the next weekend and has some loose ends he has to tie up before the big day arrives.

However, en route to Boca the Kelly men stumble upon a beach bombarded with coeds during Spring Break.

And although Jason has every intention of going to Florida and getting back with his reputation in tact, an old friend by the name of Shadia (Zoey Deutch) will severely test his love for his fiancée, Meredith (Julianne Hough).

And although Dick has been faithful for decades to an actual adult, he has no problems with the sexual overtures of University of Florida student Lenore (Aubrey Plaza), who wants to have sex with a professor to complete her trifecta.

Lucky for her, Dick has no problem pretending to be a college professor or anything else Lenore desires.

What follows in “Dirty Grandpa” is a mix between “American Pie” and “Last Vegas,” with a little bit of police humor made popular in “The Hangover.”

“Dirty Grandpa” is hilarious but is a typical, formulaic Hollywood comedy.

There is nothing wrong with formulaic per se, but without originality “Dirty Grandpa” cannot outshine its predecessors like “American Pie,” “The Hangover” or “Last Vegas.”

Furthermore, DeNiro’s character in “Dirty Grandpa” has too many similarities with his character from the “Meet the Parents” trilogy when it pertains to occupation.

Nevertheless, the film is still very funny and enjoyable.

But the aforementioned films that one can compare to this one are comedic classics and will live forever like “Coming to America” or “Friday.”

This film is pretty decent, but not good enough to remain relevant for decades to come.

Nonetheless, the DVD and Blu-ray does feature some splendid bonuses such as an unrated version of “Dirty Grandpa,” a lesson on seduction featurette and a special on the making of the film.

Although the film may not live on in perpetuity, it will definitely ruin your image of grandfathers and do it in a funny way.

Maybe that is good enough.