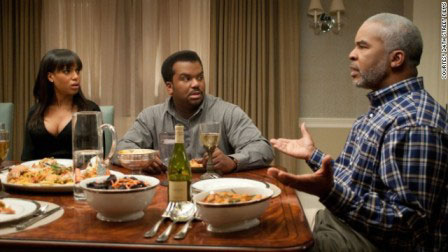 Peeples represents the growth of Tyler Perry as a producer (Photo courtesy of 34th Street Films).

The Jacksons Ain’t Got Nothin’ on the Peeples

For 45 years, the Jackson family represented the epitome of dysfunction for many critics.  From infighting to criminal charges, the most famous family in entertainment represented the true complexity of the family dynamic.

However, albeit fictional, the Peeples make the Jacksons look like the Huxtables in the latest film produced by media mogul Tyler Perry, possibly becoming the most dysfunctional “family” in Hollywood history.

The Peeples are the “chocolate Kennedys” in the eyes of Wade Walker (Craig Robinson), an aspiring child educator that makes his living performing tunes about children not urinating on themselves at parties.

He is totally out of his league, but manages to pull Grace Peeples (Kerry Washington) and he is determined to pop the question and make her his fiancé.

However, when Wade arrives uninvited at the family’s beachside mansion for the annual Moby Dick Day weekend, he realizes that his relationship with Grace is news to her parents, especially her father Virgil (David Alan Grier).

Judge Virgil Peeples is an ultra-competitive overachiever who desires the perfect family and the perfect men for his daughters and he automatically assumes the worst in Wayne.  Wayne goes out of his way to prove his worth to the “perfect” family, but soon realizes that wealth does not make families immune from the dysfunction of ordinary families.

From nudist hippies, to kleptomaniacs to a closeted daughter, the “chocolate Kennedys” are far from the perfect family.

The film Peeples is a big jump for the Perry franchise and his 34th Street Films production company because his success has now paved the way for him to give up-and-coming filmmakers a chance to showcase their talent.

The film is written and directed by Tina Gordon Chism who does not deviate much from the comedic genius of Perry films, but writes a script that is more subtle in its comedy, as opposed to the over the top comedy in the Madea franchise.

And although the film does not have the religious references that some have come to expect in a Perry-produced film, one still comes away with a message, which is the old cliché “do not judge a book by its cover.”

The film is absolutely hilarious from rich kid Simon (Tyler James Williams), or “Si” as he prefers to be called, trying to be a street tough rapper, to Wade’s brother Chris (Malcolm Barrett) trying to turn Grace’s sister Gloria (Kali Hawk) on to men, the movie will have audiences in stitches.

Chism’s film only begins to drag during the Moby Dick Day celebration, but Robinson even makes the slower moments hilarious.  The film is like a who’s-who in cinema and television history from S. Epatha Mekerson (Daphne Peeples) to Melvin Van Peebles (Grandpa Peeples) to Diahann Carroll (Nana Peeples).

The film was so well presented that it might even quiet Perry’s critics down a bit.  He is beginning to open doors and is giving people a chance at directing feature films, which they might not have been able to do otherwise.

And although this film portrays another zany and dysfunctional family much like the Browns and the Simmons family, the mogul shows that he is not a one trick-pony and has several shrewd moves up his sleeve.