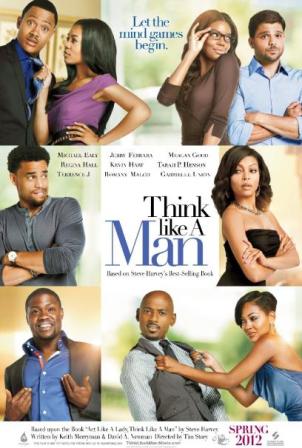 Understanding the Opposite Sex

Nevertheless, when I heard he was turning his best-selling book into the Think Like a Man movie, I was not too enthusiastic initially.  How would Harvey turn a book that was not a novel or biography/autobiography into a story line that would keep moviegoers interested for two hours?

The women, frustrated with love, turn to Harvey’s book to understand the opposite sex.  Unbeknownst to the men, they come under attack by the advice of a “traitor” (Steve Harvey) and the women begin to see that their ideal men are not that ideal at all.

When the men find out where their women are getting their ammunition, they begin reading the book as well so they can pretend to be that ideal man for their woman.

My apprehension was erased after laughing for an entire two hours at “idiots” like Kevin Hart who plays Cedric, a hen-pecked man going through a bitter divorce.  Hart, whose star is continuing to grow, makes the film stand out and is the undisputed star of the Think Like a Man movie.

Michael Ealy plays Dominic, the man with potential, but the man who has not reached his career or financial goals.  He has all of the right moves to get the woman of his dreams, Lauren (Taraji P. Henson), but not enough capital to keep her captivated.

Jeremy (Jerry Ferrara), has the girl and a half-way decent job, but lacks the maturity that Kristen (Gabrielle Union) is looking for in a husband.  They have been together, shacking up since college, but Jeremy is completely satisfied with the status quo.

Mya (Meagan Goode) is a good-girl who becomes dedicated to Harvey’s 90-day abstinence plan after dating guys like Alex (Chris Brown) who cannot seem to remember her name.

Zeke (Romany Malco) is the ladies man of the group of guys but is thrown through the loop of love when he becomes a “casualty” of Mya’s abstinence program.

Candace (Regina Hall) is a dedicated single mother who has not dated in a couple of years, causing family members to wonder about her.  She meets the “perfect” guy, Michael, who has admired her since high school.  There is only one problem.  Michael is a mama’s boy, more committed to his mother Loretta (Jenifer Lewis) than to her and her son.

Bennett (Gary Owens) is the only level-headed guy of the group, as he would rather cut his nights with the “fellas” short to return home to his wife.

While the Think Like a Man movie does not require one to think too much and has a typical ending, the comedic genius of Hart and the cameo appearances of some of Hollywood’s best known stars makes this movie something you must see, whether it is as a date flick or not.

The Think Like a Man movie, however, will make men and women think about their relationships and whether or not they are looking for the right things when it comes to picking a relationship partner.

Harvey’s film shows men they have a lot of growing up to do in order to please their women.  And women discover that the superficial reasons they use to get involved, or avoid a relationship shows that they need to mature as well.