‘The Best Man Holiday’ Lives Up to Legacy 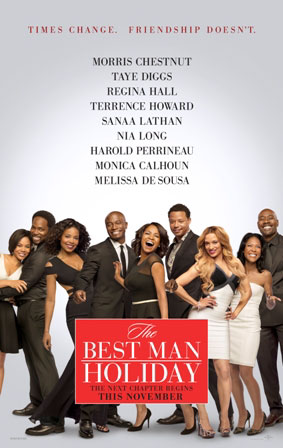 Better Late than Never, And worth the Wait

Usually, sequels do not take 14 years to come to fruition, but “The Best Man Holiday” is the exception to the rule.

In 1999, Black moviegoers craved to so see young, normal and successful Black characters on the big screen, and filmmaker Malcolm D. Lee blessed them with iconic characters and scenes that are just as famous today as it was over a decade ago.

Fans of “The Best Man” always wanted to know if Quentin (Terrence Howard) finally settled down, and if Harper ever got over Jordan (Nia Long).  Nobody knew that it would take this long to find the answers to those burning questions, but good things come to those who wait and “The Best Man Holiday” is definitely worth the wait and then some.

Although watching “The Best Man” is essential to understand the nuances of the sequel and the characters, “The Best Man Holiday” picks up where the original left off with Harper (Taye Diggs) proposing to Robyn (Sanaa Lathan); Julian (Harold Perrineau) leaving Shelby (Melissa De Sousa) for Candace (Regina Hall), and Quentin regretfully sleeping with Shelby.

Lee then catches fans up with the characters’ lives over the last 14 years.

Harper’s books are not bestsellers anymore and he has been laid off from his job as a professor at NYU because of budget cuts.

Robyn is a successful chef and caterer and is pregnant again, despite a previous miscarriage.  The baby is breached and will require a C-section for successful delivery.

Quentin runs a successful brand management company, where White people actually pay him to let them know what Black people think, despite his light hue.

Julian and Candace run a successful school, but donations start to dry up when Candace’s past as a stripper surfaces on the Internet.

Fittingly, Shelby is now a notorious member of the reality television series, “The Real Housewives of Westchester,” where her unique brand of drama makes her a star.

Jordan is still Ms. Independent, winning Emmy Awards for her documentaries at MSNBC.  Despite her independent streak, she has opened up her dating pool after hooking up with Brian (Eddie Cibrian).

Lance (Morris Chestnut) is on the verge of retirement after a long football career in New York.  He is also closing in on the all-time rushing record while his Giants prepare for a Christmas day game with the Falcons with a playoff berth on the line.

Usually sequels never quite live up to the expectations of the original, but “The Best Man Holiday” is one of those rare second installments that equal the original in all aspects.

Lee’s ingenuity is that he does not try to re-create “The Best Man.”  He allows “The Best Man Holiday” to stand on its own two feet, and it is a totally different film from the comedic original.

Not to be mistaken, the comedy is definitely there.  Quentin is still the same ole messy, womanizing Quentin and Shelby is still Shelby, unfortunately.

Furthermore, what would a “Best Man” movie be without some kind of book involved?

But while the original profiled the enormous success that many know is the norm for young Black professionals, “The Best Man Holiday” deals with the tragedies and realities that money, education and success cannot immune people from.

Early success does not immune one from the roller coaster called life, from miscarriages to relationship baggage to financial struggles.

However, with faith and great friends, one can overcome the obstacles that will surely come, and “The Best Man Holiday” illustrates that one can still navigate the rough stretches in life and have fun along the way.

In one emotional scene, Chestnut masterfully exudes the raw emotion that no man plans to deal with at such an early age.  His emotions are brutally honest, showing depth as an actor that has not been seen from him in quite some time.

The only thing that is hard to believe is the fact the Lance is still playing running back after over 15 years, when most NFL running backs are washed up by age 30.

Nevertheless, the fact that moviegoers get to see some of their favorite characters again this Christmas will definitely be a gift.

Being the man of faith that he is, Lance would tell fans that God does not always come when you want Him, but He is always on time.

“The Best Man Holiday” may have come 14 years later, but the film is definitely right on time, and will definitely be another classic for Lee and his brilliant cast.