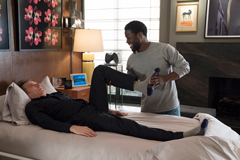 Kevin Hart Spreads His Wings with ‘The Upside’

In 1989, R&B group Troop flooded the radio airwaves with a classic song entitled, “Spread My Wings.”

While the California-based quintet talked about spreading their wings in the sense of finding true love, thanks to “The Upside,” comedian Kevin Hart has spread his wings dramatically and proven that he is more than just a one-trick pony.

And thanks to his role as Dell in “The Upside,” Hart’s detractors will have to take his talents more seriously because there is more in him than just simple jokes and laughs.

In “The Upside,” Dell has just touched back down after his release from prison.

Dell represents the stereotypical Black male in many Hollywood films and television shows.

He is an absentee father.

He dabbled in the dope game for a minute.

Dell is a no-show when it comes to spending time with his son, Anthony (Jahi Di’Allo Winston, “The New Edition Story”).

Anthony’s mother Latrice (Aja Naomi King, “The Birth of a Nation”) has gotten so disgusted with Dell that she does not even want him around them anymore.

She forbids him from visiting their apartment even though Dell is the one that got them the apartment.

Anthony does not even speak to his father when he tries to strike up a conversation.

Although Dell kind of wants to work, his criminal background almost makes it impossible for him to find work.

Temporarily, all Dell has to do in the meantime is get several signatures from business owners or managers to let his parole officer know that he is at least looking for a job.

Dell shows up to a luxury New York apartment building after applying for a janitorial job.

However, he mistakenly tells the apartment manager that he is at the building looking to apply for the more prestigious life auxiliary job, working for business tycoon, Phillip (Bryan Cranston, “Breaking Bad”).

The ex-convict is only in Phillip’s apartment so that he can get a signature from him so that his parole officer will not violate him and send him back to prison.

The only problem with getting a signature from Phillip is that he is paralyzed from the shoulders down and cannot use his hands or his feet.

Despite Dell’s unprofessionalism and lack of skills for the gig, Phillip offers him the job and gives him a night to mull his decision.

Dell does not want the job.

However, with Anthony and Latrice giving up on him, he has to do something to earn a spot back in his son’s life.

Dell has no money.

He has nowhere to go.

And he has no prospects for the future.

So when he is informed how much the life auxiliary job pays and the fact that it is a live-in job in a luxury penthouse suite, taking the job becomes a no-brainer.

Despite the fact that Phillip likes Dell and wants him as his life auxiliary, his assistant Yvonne (Nicole Kidman, “Destroyer”) is no fan of the ex-convict.

Yvonne thinks Dell is the least qualified candidate and she gives him three strikes before she terminates him from the job and replaces him with a real life auxiliary.

In “The Upside,” Dell has to be on call at all times to cater to Phillip’s every need.

Dell has to feed Phillip.

He has to help him with his physical therapy.

Dell even has to replace Phillip’s catheter, which he says is definitely not in his job description.

The ex-con cannot even get Phillip in his wheelchair correctly or feed him correctly.

Therefore, the chances of him lasting long on the job with only three strikes at his disposal are probably slim to none.

But something unique happens in “The Upside.”

A true friendship develops between the rich business tycoon and the former thief and drug dealer.

Despite his wealth, Phillip has become disgusted with his life.

His only true reason to live is gone and he even has issued a do not resuscitate order to all of his employees, including Dell.

Fortunately for Phillip, Dell introduces him to real life experiences that he has become closed off from because of his wealth and success.

Dell introduces Phillip to the benefits of great marijuana, which the business tycoon takes a liking to almost immediately.

He gets so high that he orders 1,500 hot dogs to curb his munchies.

Dell teaches Phillip that there are more musical genres than classical.

The new life auxiliary introduces Phillip to the “Queen of Soul,” Aretha Franklin.

And Dell teaches Phillip that he has a lot to live for if he would just start living.

But in the process of Dell transforming Phillip, Dell’s boss also begins to transform him in positive ways.

Dell starts appreciating the finer things in life like classical music and art.

In the process, Dell finally becomes the man that Latrice and Anthony need him to be.

But when Phillip and Dell finally hit a bump in their friendship, all of the growth, transformation and maturity the two experience while working together might come crashing down and send the two back to where they were before they met.

While “The Upside” would not be a true Hart movie without its hilarious moments, Hart’s role as Dell is funny in a subdued and subtle way.

Some of his familiar antics and expressions are present in “The Upside,” but the role is more dramatic and nuanced than any other film he has appeared it.

` In an interview, Hart once told RegalMag.com that he would not try to venture too deep into dramatic waters instead choosing to stay in his own comedic lane.

But “The Upside” seems to represent a change of heart for Hart who plays a character with depth, raw emotions and real transformation.

And although “The Upside” is extremely predictable like many feel-good movies, it is also extremely heartfelt and inspiring.

“The Upside” shows that even those from the margins of life can spread their wings like Hart if society does not clip their wings off before they get an opportunity to fly.