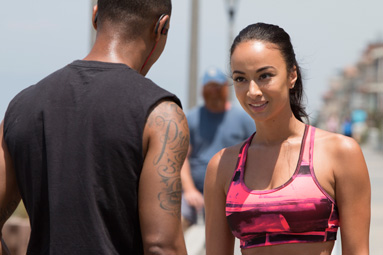 At first glance “The Perfect Match” might seem like the perfect carbon copy of so many African-American romantic comedies or “dramedies.”

Several couples trying to figure out love, marriage and parenting, while one friend tries to determine his/her next piece.

However, “The Perfect Match” is more of an offspring of Eddie Murphy’s “Boomerang” (1992) than a carbon copy of films like “Think Like a Man,” only in a more dramatic kind of way.

And “The Perfect Match” is the perfect vehicle to show that actor/TV personality Terrence J can carry a film as a leading man and has the chops to spread his wings beyond rom coms.

Charlie Mack (Terrence Jenkins) is just what his name states, a mac.

He has no intentions of settling down with one woman even though all of his friends are married or engaged and they desperately want to hook him up with a potential long-term and serious girlfriend.

Charlie’s philandering is so bad that he even puts out a want advertisement in the newspaper during college for a cuddy buddy.

And Rick (Donald Faison, “Scrubs”) and Pressie (Dascha Polanco, “Orange is the New Black”) have been struggling to conceive for almost a year.

Despite the stable home lives of his friends, Charlie has no intentions of joining them in holy matrimony anytime soon.

His boys and his sister want to see him settle down and attempt to find love and happiness.

The fellas bet him that if he dates only one woman until Ginger and Victor’s wedding he will become attached to that woman and catch feelings for her.

Charlie takes them up on that wager after meeting the beautiful Eva, played by singer Cassie, at work and at a popular coffee shop.

What occurs leading up to the wedding comes out of left field and might make Charlie even more opposed to the idea of a monogamous relationship.

“The Perfect Match” starts off slow and not very unique.

However, somewhere near the midway point it hits a loud crescendo and then explodes with an emotional climax that moviegoers will not see coming.

Although, it is not close to being as funny as the Murphy classic “Boomerang,” it is more dramatic and the acting might be a little better than its predecessor towards the end.

Victor and Rick are not ladies men like Gerard (David Alan Grier) and Tyler (Martin Lawrence) in “Boomerang.”

On the other hand, Charlie is like Marcus (Murphy) in “Boomerang,” using his career to prey on beautiful women.

To make the “Boomerang” comparisons even more believable, Robin Givens appears in “The Perfect Match” as demanding wedding coordinator Geneva.

The only thing missing is an elderly cougar like Lady Eloise (Earth Kitt) without panties to scream out “Chaaaaaaarrrrllllie!”

Nevertheless, “The Perfect Match” falls short of being a really good film because of the slow, cliché start.

Despite the beginning being the carbon copy of other African-American rom coms, the ending shows that the film can stand on its own, alone from the crowded pack of similar films.

And Terrence J shows that he can stand alone as the leading man in a major motion picture.

The film is a perfect match for his talent.