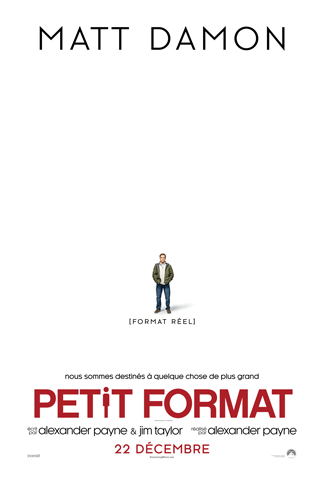 Not Worth Seeing Twice

However, not a totally original concept if people remember “Honey, I Shrunk the Kids.”

Nevertheless, “Downsizing” starring Matt Damon (“Suburbicon”) is kind of dull in the beginning and not well executed.

The saving grace for “Downsizing” is the hilarious performance by Hong Chau as Ngoc Lan Tran (“Treme”) and an enjoyable performance by Christoph Waltz (“Django Unchained”) as Dusan Mirkovic.

In “Downsizing,” Paul (Damon) cannot catch a break in life.

He went to college in pre-med, but had to settle for a career working in occupational therapy for Omega Steaks when his mother takes ill.

The occupational therapist also has to deal with a sickly wife.

Paul is barely surviving in life.

Likewise, the world is barely surviving because of the danger human beings present to the environment.

Because of overpopulation and overuse of greenhouse gases, the world is danger of going into extinction because of manmade mistakes.

The solution that Norwegian scientists come up with is downsizing or intentionally shrinking oneself and living in an environment designed for miniature people.

The reason why shrinking is so helpful to the environment is because the smaller people are and the smaller their communities are, the less greenhouse gases and wastes they will need to survive, causing less stress on the environment.

The reason why human beings are so fascinated with the notion of shrinking is that they can take $100,000 and live like multimillionaires because they can get much more for their money.

So after much deliberation, Paul and his wife, Audrey (Kristen Wiig) decide to leave their family and friends behind in Omaha, Neb. and move to Leisureland to live in a luxurious mansion and live off the money that they already possess, which is enough to provide a living without working in their new small community.

As moviegoers will probably guess from the get-go, something goes wrong during the couple’s downsizing surgery.

Furthermore, although downsizing is seen as the solution to man and the world’s problems, the surgery creates more problems than the ones that existed before this scientific breakthrough.

For most, if not the entire movie, “Downsizing” is all over the place.

Although it is watchable, the movie does not begin to shine until Chau hits the screen as the Vietnamese political prisoner, Ngoc.

Chau (Ngoc) is absolutely hilarious from her scenes calling Paul stupid and a crazy person to accidentally killing her friend by giving her too many Percocet pills.

But as Ngoc explained to Paul, even though she accidentally killed her sick friend, at least she died happy with a smile on her face after Ngoc gave her five Percocet pills at one time.

Furthermore, Waltz is good as an old school player who desperately wants Paul to loosen up and enjoy himself despite downsizing throwing him a curveball that he struggles to get over.

However, none of the aforementioned performances and appearances can make up for another lackluster film from Damon.

The Boston-bred actor is obviously one of Hollywood’s biggest talents, but he has unfortunately picked some duds to appear in recently like “Suburbicon” and “The Great Wall.”

Maybe Damon should downsize the list of films he has picked recently because that might produce a better result for him.