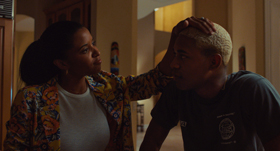 It seems like since the beginning of time, White filmmakers and content creators have gotten flak for documenting African-American life, and sometimes rightfully so.

Actor John Amos quit the sitcom “Good Times” because of the stereotypical portrayal of the character, J.J. (Jimmie Walker).

Furthermore, Bill Cosby often got into disagreements with writers, producers and critics who said condescendingly that the portrayal of an affluent African-American family on “The Cosby Show” did not seem realistic.

Cosby responded by telling the White producers and writers that he would educate them on the African-American family and not the other way around.

Therefore, the criticism that native Houstonian Trey Edward Shults might receive for attempting to portray African-American family life in his new film “Waves” would seem understandable at first glance because often White filmmakers fail to educate themselves when depicting African-American life.

But Shults nails it with “Waves,” producing a cautionary tale that every teenager and his or her parents should see, immediately.

Sure, his family has had to overcome tragedy in the past, but they live an extremely affluent lifestyle thanks to the success of his architectural/construction firm.

And his beautiful wife Catharine (Renee Elise-Goldsberry) works side-by-side with him, making sure the business keeps bringing in big profits.

He teaches Tyler that since he is African-American, he has to work 10 times as hard as his White counterparts to get ahead in life.

Tyler is a star wrestler on the high school wrestling team.

He has a young girlfriend who adores him.

Her family has even accepted Tyler as one of their own family members.

But despite all that he has going for himself, Tyler still faces pressure in his senior year in high school.

Though he has plans to wrestle next year in college, Tyler has an injury that he has hidden from his parents, teammates and his coaches.

He has secretly started taking his father’s oxycodone that Ronald periodically takes for his bad knee.

Furthermore, Tyler and his girlfriend have begun experiencing some tension in their relationships that threatens their future before they can truly start a life as a real adult couple.

But the majority of the pressure that Tyler faces comes from his overbearing father, Ronald.

Although Ronald has Tyler’s best interests at heart, he pushes Tyler way too far, not giving his teenage son much time to truly enjoy his coming-of-age years.

Ronald is like Joe Jackson (Lawrence Hilton Jacobs) in the 1992 television miniseries, “The Jacksons: An American Dream.”

When Joe’s sons want to play like normal children, he forces them to work strenuously at their craft as up-and-coming R&B singers.

If their work does not meet his standards, Joe’s children face retribution for something that many consider an extracurricular activity and not life and death.

Ronald does channel his inner Joe Jackson and inner Lavar Ball (without the over the top theatrics and need for the spotlight).

But while Jackson and Ball seemed to have tried to vicariously live through their sons, Ronald does not seem to have that problem.

Ronald achieved his personal career dreams in life, unlike Ball and Jackson.

The domineering father just wants to see Tyler fulfill his dreams, and he knows that hard work represents the difference between true success and heartache.

But Ronald’s parental tactics in “Waves” might push Tyler over the edge and not to the edge of success in life.

Furthermore, when Tyler faces a severe tragedy in “Waves,” the family might endure a crisis that only leaning on each other, and leaning on faith, can overcome.

What Shults gets completely right in “Waves” is the fact that African-American family life mirrors family life for Americans of all racial backgrounds.

Sure, “Waves” makes mention of race and portrays the volatile racial climate that exists in America in one scene in particular.

But “Waves” does not try to portray African-Americans as if they are something other than humans experiencing regular human pain and heartache.

Shults does not try to make “Waves” an African-American film.

He simply makes “Waves” a 2019 realistic portrayal of what parents and teenagers have to endure from volatile relationships, pill popping and the desire for teenagers to break away from parental supervision.

The family goes to church devoutly, and they do not have any out of the ordinary drama that takes place inside their home.

And what Shults gets really correct is his portrayal of young interracial relationships.

He gets it right by not really mentioning race at all as it pertains to relationships.

And although “Waves” stars Brown and Harrison, Houston native Goldsberry steals the show.

The pain and adversity that Tyler goes through in “Waves” is shocking.

It shows that many people that bring bad vibes to their life do so because of one bad decision, not because they are vile individuals.

However, “Waves” is not really one motion picture, but a before movie and an after movie, like a before and after still picture.

“Waves” depicts the family pre-crisis and depicts how they deal with that crisis.

And family crisis is something that all families and filmmakers know about, Black or White.