‘Blow the Man Down’ Does Not Pack Enough Steam 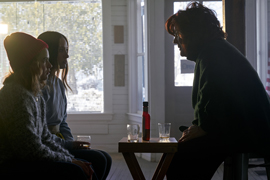 “Blow the Man Down” is now available for streaming on Prime Video (Photo Credit: Jeong Park/Courtesy of Amazon Studios).

No Resurrection from Dead

Sometimes, funerals bring out the best and worst in families.

Sure, funerals include much mourning.

But often funerals represent the only family reunion for some relatives, reminiscing on all of the good times shared with their departed loved-one.

Unfortunately, funerals can bring out the worst in relatives too.

People fight about the will the departed left behind.

And some relatives even argue about who spent more time with that departed loved-one if they battled an illness for a long time or just needed extensive care because of old age.

Therefore, when many funerals are over, relatives often go their separate ways until the next untimely demise in the family.

That desire to abandon the family is especially prevalent for those who feel they have put their lives on hold to take care of a relative.

In “Blow the Man Down,” Mary Margaret’s death seems to have blown right through her family and the entire community of Easter Cove, Maine like a devastating avalanche, leaving everything in its way in shambles.

Mary Margaret’s daughter and namesake Mary Beth put college on hold to tend to her mother in Easter Cave, Maine.

“Blow the Man Down” basically begins after Mary Margaret’s funeral, and Mary Beth tells anyone that will listen that she plans to abandon Easter Cove as soon as she gets an opportunity.

Mary Beth’s sister Priscilla seems satisfied and content in Easter Cove, which is the polar opposite of her sister.

However, in “Blow the Man Down,” Priscilla has been hiding something from Mary Beth.

Although business appears stable on the outside looking in, because of Mary Margaret’s predicament while alive, her daughters are on the verge of losing their mother’s house.

Learning that bit of information sends Mary Beth off the edge in her dislike for everything related to Easter Cove, Maine.

While many people would spend time with family the night of their mother’s funeral, Mary Beth does not.

The young lady instead goes to a local bar trying to get a gentleman to buy her an alcoholic beverage.

While she passes on the decent guy in the bar, whom she has known for sometime, Mary Beth instead opts for a creepy visitor from out of town to occupy her in her time of bereavement.

After a few cold ones, Mary Beth has to drive the man home in his automobile.

Mary Beth thinks she has found someone to chill with that night.

But instead she meets a man that will adversely affect her life for the foreseeable future.

The drifter has a gun in his glove compartment.

He also has cocaine in his truck.

To make matters worse, Mary Beth crashes his truck and finds herself sexually assaulted by him as well.

Finally making it back to the young man’s domicile, Mary Beth has to fight off another assault as the man tries to grab her.

However, the man still pursues her following Mary Beth around houses in the quiet neighborhood.

In an attempt to defend herself, Mary Beth strikes the man with a harpoon before killing him with a brick.

Scared to call the cops and assert self-defense, Mary Beth has to maneuver in such a way that she does not become a murder suspect before making her great escape from Easter Cove, Maine.

Furthermore, Mary Beth has to deal with some more secrets that friends and family have kept from her for her entire lifetime.

But the breakfast is not what the local establishment is most known for.

The bed and breakfast is infamous for its beds and the loud noises constantly coming from the bedrooms.

But anyone with eyes could see what is going on at the popular bed and breakfast with the scantily clad ladies coming in and out despite the freezing Maine temperatures.

Fortunately, there are some positives to having friends in low places, not high places.

A friend in low places is not a typo.

People who participate in illegal activities can help get the police off of your behind because many have experience ducking the law.

Contrarily, friends in high places, the ones who always try to get you to do the “right” thing, sometimes lead people to the wrong outcome.

The wrong outcome for Mary Beth in “Blow the Man Down” would be a jail cell being constantly abused by the more hardened criminals in prison.

In “Blow the Man Down,” Mary Beth has to make the right decision before a decision is made for her by local law enforcement.

Despite the potential of a movie with such an interesting storyline, “Blow the Man Down” starts off wack, has some more wack moments in between before finally leaving moviegoers hanging in the end.

Eastern Cove, Maine is a fishing town with fishermen coming in and out of the town on business.

“Blow the Man Down” begins with some horrendous singing from said fishermen.

They sang throughout “Blow the Man Down” too.

Unfortunately, none of the fishermen can actually “blow,” as in sing.

The actors did not perform badly.

Unfortunately, screenwriters of “Blow the Man Down” did not give the actors and actresses the right material to really get down and show their acting chops.

Harshly, “Blow the Man Down” begins after a funeral and the move never really comes back to life either.

Stream “Blow the Man Down” now on Amazon Prime Video.