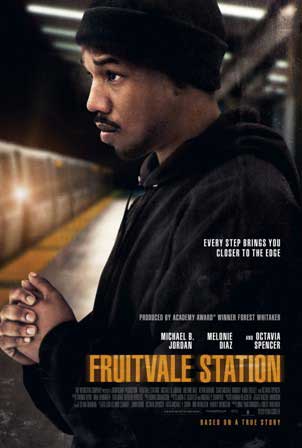 Michael B. Jordan should get Oscar consideration for his performance in “Fruitvale Station” (Photo courtesy of The Weinstein Company).

Racial profiling is currently the hot topic for many after the acquittal of George Zimmerman in the killing of 17-year-old teenager Trayvon Martin.

Some skeptics probably doubt the seriousness of racial profiling, but most if not all, Black males can relate to the plight of Martin and Oscar Grant; Black males who were attempting to live their life to the best of their ability until someone’s prejudices deemed them a threat.

Like Martin, Oscar (played by Michael B. Jordan) is not perfect.  Then again who is?

He has made his mistakes from selling marijuana to losing his job because of habitual tardiness.

But like Martin, Oscar has a support system that is determined to see him become the best father and best man he can become such as his mother Wanda (Octavia Spencer), girlfriend Sophina (Melonie Diaz) and Grandma Bonnie (Marjorie Shears).

Although irresponsible at times, Oscar shows his heart by caring and crying for a dying dog at a gas station and throwing out his stash of marijuana in an attempt to turn over a new leaf in life.

“Fruitvale Station” takes place on New Year’s Eve 2008.  Oscar is eager to begin anew despite having a history of incarceration and setbacks.  New Year’s Eve also happens to be his mother’s birthday and he, Sophina and their daughter Tatiana (Ariana Neal) are looking forward to celebrating the evening with family and his Grandma Bonnie’s famous gumbo.

The film is shot as a typical day for an Oakland man with flashbacks to Oscar’s time on lockdown.

Like all men, he has come to that age in his early twenties where he has to decide what road he will take in life.  Will he be the responsible man that Wanda raised or will the temptation of his past crimes and associates take him down a path of destruction?

“Frutivale Station” is not genius because of its timing, which coincides with the Zimmerman verdict, but because it shows that despite the mistakes that some Black men make, coupled with the racist stereotypes they are labeled with, most are just normal human beings trying to navigate life and leave a positive and lasting legacy.

The Ryan Coogler-directed “Fruitvale Station” shows a passionate and loving father, whose life revolves around the precious females in his life.  Like many fathers, Oscar downright spoils his baby daughter.

Oscar desperately wants his job back despite the mistakes of his past and he wants Sophina to believe in him, despite his youthful mistakes in the past.

Furthermore, it is New Year’s in Oakland and he wants to end the day celebrating 2009 with fireworks and friends.  Unfortunately, that decision led to a real-life incident that mirrors the fate of Martin in Sanford, Fla.

Jordan is superb and deserves Academy Award consideration.  Spencer is her usual stellar self, but her role is not large enough to seriously garner Oscar consideration.

“Frutivale Station” is pure genius and the actors from top to bottom are genius.

However, “Frutivale Station” is an extremely short movie.  It would have been great to have courtroom scenes at the end of the movie, although appropriation laws probably made that an unrealistic expectation.

Nevertheless, even the imperfections and flaws of “Frutivale Station” are genius.

For example, the film shows the normal and boring everyday life of Oscar from dropping his daughter off at school, to filling his car up with gas to trying to prepare for a birthday party before it leads to an explosive climax.

Even though these scenes may drag, Coogler succeeds in showing that Oscar was a normal young man with dreams, not an out of control thug.

Be prepared to cry.  Be prepared to get angry.  But most of all be prepared to think and discuss the realities of racial profiling and what can be done to stop this unfortunate reality because in these turbulent times America needs healing and understanding, not anger, racism and more division.