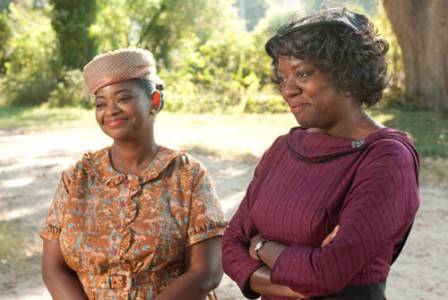 Octavia Spencer (left) and Viola Davis are simply remarkable in The Help film.

The Jim Crow days in the South are an era that many African Americans try to distance themselves from because it brings back a time in the not too distant past when African Americans were viewed as less than and forced into menial jobs to make ends meet.

I grew up in a family where my maternal and paternal grandmothers were forced to quit school at an early age and work as domestics because there were simply very few options for African American women.

Nevertheless, The Help film harkens back to that era, but it does not show African Americans as simply the help, but it humanizes and dignifies them, showing their true feelings despite the risk they took to voice their opinions about their White bosses.

The film centers on Skeeter (Emma Stone) who returns to Jackson, Miss. after graduating with a journalism degree from Ole Miss and gets a job with a local newspaper.  Her long term plans are to work for a book publishing company, but she begins her career writing a housekeeping column for the Jackson Journal.

Although the housekeeping columns are a good way for her to enter the business, Skeeter comes up with a grand way to make a name for herself.  She wants to profile the Black housekeepers to get their opinion on working for White families during the Civil Rights Movement in a state not known for racial equality.

Skeeter has a much different opinion of African Americans than most of her White peers because of her deep affection for her family’s former maid Constantine (Cicely Tyson).

On the contrary, Hilly (Bryce Dallas Howard) spearheads a movement in Jackson that would require White families to have separate restroom facilities for the Black help.  When Minnie (Octavia Spencer, who deserves at least an Oscar nomination for her performance) refuses to go outside to relieve herself during a tornado, she is fired as Hilly’s maid and blackballed by almost every White family in Jackson.

Elizabeth (Ahna O’Reilly) is no Hilly, but she is no Skeeter either.  She knows that the racist attitudes towards maids is wrong, but is not progressive enough to take a stand like Skeeter.  She initially agrees to let the budding journalist interview her maid Aibileen (Davis) but eventually reneges, forcing Skeeter to travel to the Black neighborhoods to get her story.

Initially, Skeeter only finds Aibileen and Minny willing to discuss their true feelings about their place in the Jim Crow South, but that number soon swells to at least a dozen after the assassination of civil rights leader Medgar Evers.

Skeeter publishes her interviews in a book, which exposes the atrocities of racism from the viewpoint of the victims, when the courage of the maids could have easily led to their deaths.