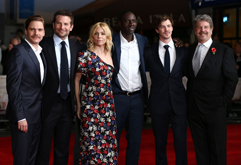 In “Burnt,” the character Adam Jones (Bradley Cooper) combines the arrogance and anger of television chef Gordon Ramsay (“Hell’s Kitchen”) with the almost wasted potential of a music legend portrayed in “Livin’ for Love: The Natalie Cole Story.”

Ramsay’s desire for perfect dishes makes it almost impossible for other chefs to handle his harsh criticism.

There are very few second acts in Hollywood but what about amongst celebrity chefs?

Thankfully, Cole rebounded from near self-destruction, but will Adam’s industry be as forgiving of his past sins?

Arrogance is a tricky thing to manage.

Sure, confidence is great and everyone loves someone with swagger.

However, arrogance can lead to complacency.

Arrogance can lead one to think that their talents are more than they really are.

And arrogance can lead one to alienate others around them as if success is a singular accomplishment and not a collaborative effort.

Adam falls victim to the tangled web of arrogance as the best chef in Paris.

His attitude leads him to abuse crack cocaine.

And his hubris leads him to abuse those who truly care about him and support his ingenuity.

Unfortunately, pride comes before the fall and for Adam the fall is catastrophic.

The best chef in Paris falls all the way into the abyss of shucking oysters in a small New Orleans restaurant, far from the glitz and glamour of upscale European restaurants.

What can be even trickier than suppressing arrogance is suppressing the desire for perfection, as Adam attempts to receive a perfect three-star rating for his new restaurant in London after he brushes himself off from his unceremonious fall from grace.

Although his heart is in the right place, seeking perfection (despite humility) can lead one to the same destructive behavior as arrogance can.

The desire for perfection can lead to alienation and devastation.

“Burnt” is a simplistic movie about wasted potential and the desperate desire for redemption.

The premise, which involves the culinary arts, could have involved sports, entertainment and politics.

We have seen the desire for redemption, both successfully and unsuccessfully, in the stories of Michael Vick, Whitney Houston, the late Marion Barry and Robert Downey, Jr.

However, for writers Steven Knight and Michael Kalesniko to center “Burnt” around the competitive world of culinary arts adds a different twist to the redemption narrative.

Cooper again shows his broad range as an actor, proving that he excels in drama, comedy and action flicks.

His talents are almost the carbon copy of Jamie Foxx’s, minus the musical talent.

“Burnt” does a pretty decent job with its comedic timing, which is still necessary in many dramas to keep the plot somewhat lighthearted at times.

Unfortunately, watching the dishes prepared in “Burnt” will make the customary mozzarella sticks, popcorn and candy insufficient when watching such succulent dishes being prepared.

Nevertheless, “Burnt” is a sufficient cautionary tale about the dangers of arrogance and second chances, and how they both can be one in the same.