Film Review: ‘The Sense of an Ending’ Not Interesting Until End 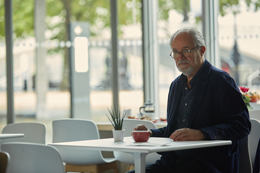 Jim Broadbent stars as Tony in “The Sense of an Ending” (Photo Credit: Robert Viglasky).

Much Ado About Nothing

Some ideas seem more interesting in one’s mind than it actually is when the idea comes to fruition.

Likewise, descriptions and a synopsis can seem very interesting if they are written correctly.

However, trailers and summaries do not always translate well on screen, and sometimes the actual films can be a complete dud.

Unfortunately for “The Sense of an Ending,” it falls into the category of mediocre duds.

In “The Sense of an Ending,” Tony Webster (Jim Broadbent) is in the golden years of his life.

Although he is a divorcee, he is still blessed with a granddaughter on the way and a somewhat successful vintage camera shop.

He is excited about the new phase in his life with his future grandson, but is thrown for a little bit of a loop when the mother of his college girlfriend, Sarah (Emily Mortimer) gives him a diary in her will.

The diary is from Adrian, but Sarah’s daughter Veronica (Charlotte Rampling) refuses to hand over the diary to Tony.

Tony desperately wants the diary because Adrian Finn (Joe Alwyn) is one of his best friends from the university who committed suicide decades earlier.

Furthermore, Tony wants that diary because it is legally his.

The question is why would his ex-girlfriend’s mother have the diary of one of his best friends?

Flashbacks, via a conversation with Tony’s ex-wife Margaret (Harriet Walker), answer the odd question about the diary and the story finally makes sense at the end of “The Sense of an Ending.”

Unfortunately, the first hour of the movie is not interesting enough for moviegoers to care about the significance of the diary when it is revealed.

Even more upsetting is the fact “The Sense of an Ending” could have been more dramatic and interesting if more screen time would have been given to the suicide, adultery and the lovechild that the story ultimately revolves around.

The movie “The Sense of an Ending” struggles because of the subpar script, not the performances by the actors.

It is a story about how life can come full circle and how one has to eventually answer for all of their mistakes.

“The Sense of an Ending” is also a story about how what goes around, comes around and how one cannot attempt to hurt others, but they instead hurt themselves.

The message is good.

The actors are good.

Unfortunately, the script is not very good.