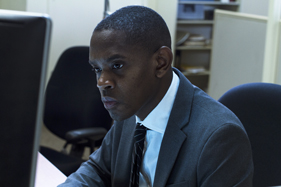 Seyi (Ami Ameen) struggles with the stress of a Wall Street job and family pressure in “Dara Ju” (Photo courtesy of Brigade Marketing).

African-American films have enjoyed a renaissance since 2016 with powerful portrayals that stretched the status quo of Black films past the stereotypical images many have grown accustomed to seeing.

From coming of age tales to racial horror films like “Get Out,” Black dollars and desires are finally being respected by Hollywood executives.

With “Dara Ju,” our African brethren have joined in on the recent renaissance and have added to the number of quality Black films since 2016.

There is nothing unique about “Dara Ju,” which centers on a son of Nigerian parents who is struggling with family pressure, relationship issues, substance abuse issues and a demanding job as a Wall Street banker.

However, the normality of Seyi Ogunde’s (Ami Ameen) life is what makes “Dara Ju” shine.

Filmmaker Anthony Onah paints a realistic portrait of a successful young Black man on Wall Street who is not perfect by any stretch of the imagination and does not come from the perfect family.

But his flaws and family dysfunction is something that all people, regardless of color or nationality, can relate to and empathize with.

In “Dara Ju,” Seyi is dealing with the typical problems of a successful 20-something.

Although he is a successful banker with a degree from Harvard University, he still has to play “the game,” which includes allowing his bosses to take credit for his ideas, while he worries about layoffs throughout the building.

Furthermore, he has a strained relationship with his father.

His father, Akin (Souleymane Sy Savane) has done something egregious to his mother, Ife (Michael Hyatt, “The Wire”) but the whole family has kept the father’s imperfections away from Seyi’s younger sister, Funmi (Hope Olaide Wilson, “Tyler Perry’s I Can Do Bad All By Myself”).  To make matters worse, Akin is still recovering from a recent stroke.

Seyi has caught the attention of a young White lady named Liz who has done Peace Corps work in Cameroon.  However, Liz (Lucy Griffiths) still has not totally broken up with her long distance boyfriend, Greg.

The young Nigerian descendant has only one friend that he can trust on the job, Alex (Peter Vack), but that friendship will be put to the test after the two get involved in something that they should not have gotten mixed up in.

The question in “Dara Ju,” is will Seyi have the strength to overcome all of his obstacles and the strength to restore his relationship with his father before it is too late?

In “Dara Ju,” writer-director Onah is able to make the film seem realistically Nigerian, accents and all, although many of the actors are from Great Britain and not Africa.

Hyatt from “The Wire” is underrated as a thespian.  She was brutal as drug dealer Avon Barksdale’s (Wood Harris) sister in the classic HBO series, but she is doting and devoted in “Dara Ju.”

Furthermore, Wilson from “Tyler Perry’s I Can Do Bad All By Myself” has some potential as well.

Unfortunately, “Dara Ju” is not unique enough to be an excellent film.

But its simplicity and relate-ability is why the film shines and why films like it continue to be desperately needed during this Black movie renaissance.