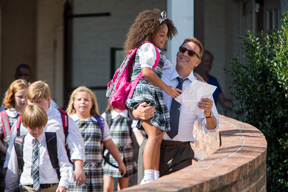 Love is Beyond Powerful and Beyond Color

Color and race still plays a role in American society.  But there is one aspect of life that race and color should not play a role in, love.

In Black America, many have a problem with Black children being raised by non-Black parents as if culture outweighs the important things in life.

However, “Black or White” starring Kevin Costner and Academy Award winner Octavia Spencer (“The Help”) brilliantly reminds people what is important at the end of the day, and color should be at the bottom of the totem pole.

“Black or White,” a tearjerker of a movie, begins with the ultimate tearjerker.  Elliot Anderson (Costner) has to come to grips that the love of his life is gone forever.

To make matters worse, he had been raising his biracial granddaughter Eloise (Jillian Estell) alone with his wife after his daughter died during childbirth.

While Eloise’s other grandmother Rowena (Spencer) and Elliot’s wife always shared a common bond as women, Rowena does not feel that Elliot has what it takes to raise a little girl on his own, especially a little Black girl.

Rowena, or Grandma We-We as she is affectionately called, believes that it is important for Eloise’s cultural development and self-identity to be around her many Black relatives in South Central Los Angeles.

While filmmaker Mike Binder could have easily become stereotypical in his portrayal of a Black family from South Central, he largely stays way from stereotypes while still staying real.

The Jeffers family is like many modern families, regardless of race.

Some went to college and professional school and are highly degreed and educated.

While others chose to forego college and still became successful in White-collar America.

The Jeffers are one of the most loving families in the world, with many cousins, aunts, uncles, and grandparents living in one house or in one neighborhood.

What they lack for in affluence, they make up for it with love.

Despite the amount of love coming out of Grandma We-We’s house, love is not enough to conquer all when it comes to the trials and tribulations of life, as Rowena’s son and Eloise’s father Reggie (Andre Holland) battles a crippling addiction while battling the cliché that is the absentee Black father.

Elliot wants Reggie nowhere near his granddaughter, which becomes even more difficult as Rowena and her lawyer/brother Jeremiah (Anthony Mackie) sue him for sole custody of Eloise.

Simply, “Black or White” is fearless, heartwarming, and beyond powerful with its message of care over color.

Binder tackles issues that are still taboo and very uncomfortable for Black Americans to hear coming from White Americans.

Everything is not about color and some of our young adults and children have problems that need to be addressed.

Likewise for White America, many Black Americans do not fit the stereotypes they may have for Black men and contrary to popular belief there is a lot of love and success in the hood.

However, Estell is the star of the show.  She is adorable and “too grown” for her age, at one time telling her grandfather that his behavior is not healthy, and often ordering him to set the dinner table.

The scene where Elliot tries to comb Eloise’s hair is hilarious.  And like Oprah Winfrey always says, Blacks and Whites are the exact same, except when it comes to the hair.  Let’s just be real with ourselves.

The other star of the show is Mpho Koaho, who plays Duvan, a math tutor, piano tutor, foreign language teacher and driver who has all the paperwork to prove his credentials.

He probably has written a movie review for his own movie too.

“Black or White” only fails a little at the beginning as it drags from the funeral to the filing of the lawsuit.

But it succeeds tremendously in a time in our history where race relations are eroding  Ultimately it shows that no matter what color, Black or White, people of all backgrounds can come together and live harmoniously if love takes precedent over color.