Film Review: ‘Ben is Back,’ But Mother’s Love Never Left 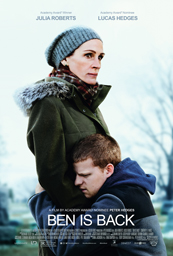 The Struggle is Real

Anyone who has a loved-one addicted to hard drugs knows that the struggle is real.

Having an addict as a family member presents a hard balancing act pitting love for that person and hatred for their actions.

“Ben is Back” starring Julia Roberts and Courtney B. Vance portrays the heartbreaking emotions that addiction presents, and will hit home for many families struggling to cope and stay together in spite of the enormous stress of drug dependence.

Although every addict’s story is a bit different, they are all the same basically.

An addict lets a drug take over their life, and they never really recover no matter how hard they try or how much their family believes in them.

Some try hard drugs for the first time because they want to fit in.

While some get addicted to hard drugs through no fault of their own.

But the rush that the particular high provides leads addicts to do everything under the sun to score their next fix from robbing, stealing, turning tricks and even selling other drugs to earn the money to purchase their drug of choice.

Some have even stolen from their own parents, siblings, neighbors and friends to get high.

Along the way, many addicts have perfected the art of lies and deception to get other people to support their drug habit.

In “Ben is Back” the titular character Ben (Lucas Hedges, “Mid90s”) has returned to his mother and stepfather’s house unexpectedly to celebrate Christmas with them and his sister and half sister and half brother.

Ben is supposed to be at a rehabilitation facility called Sober Living. But he has somehow convinced his sponsor that it would be better for him to return home to spend the holidays with his family.

Although he swears that he is over 70 days clean, his mother Holly (Roberts) insists on him taking a drug test for her and to remain in her presence for the entire time that he is at home.

Nevertheless, the only noticeable addiction that Ben still has is vaping.

Despite the fact that Ben’s stepfather Neal (Vance) does not want Ben around his children with Holly and is not as trusting as Holly, he still has love for his stepson.

Neal even takes out a second mortgage to send his stepson to rehab.

Thanks to Neal, the family lives comfortably and minus Ben’s shenanigans, the family has the ideal life.

They are preparing for the church’s Christmas play, which includes performances by Ben’s full sister Ivy (Kathryn Newton), his half-sister Lacey (Mia Fowler) and half brother, Liam (Jakari Fraser).

Ben has created an enormous amount of enemies from drug dealers he crossed to people that he got hooked on drugs.

Everywhere Ben goes in the city and throughout the home is a reminder of his drug addicted past and he will find it very difficult to stay on the straight and narrow for the one day he is allowed in his family’s home before being shipped back to Sober Living.

However, Ben’s mere presence back home might put his family in the kind of danger that they thought they left behind a long time ago.

In “Ben is Back,” the family has to somehow stay sane, stay safe and stay together despite the wedge that Ben has driven directly through his family.

He has divided the family even more than his addiction had already divided them in the first place.

The only person happy that Ben has come home for the holidays is his mother, Holly.

Mothers of drug addicts sometimes live in more denial than other family members when it comes to their child’s destructive and dangerous drug addiction.

Often, mothers believe that their child is doing better with sobriety than they really are.

Often, mothers hold on to more hope that their child will one day kick their potentially deadly habit for good.

And often mothers believe the crap that comes out of their addict child’s mouth, when everyone else is calling nonsense on their foolishness.

However, other family members have less patience.

Other family members often call an addict an addict even if they love that addict.

And other family members would rather throw in the towel on their addicted relative rather than waste the tears that will probably come inevitably.

But sometimes that motherly love is what keeps their child alive longer than they would have if the mother’s love disappeared.

In “Ben is Back,” Ben puts that motherly love to the test in an emotional performance by Roberts with equally strong performances by Vance and Hedges.

Although Roberts and Vance obviously are the veteran actors in “Ben is Back,” Hedges is starting to make a name for himself but in a way that might get him typecast.

Many of his recent roles like “Ben is Back,” “Mid90s” and “Boy Erased” have him playing similar characters, troubled teenagers and troubled young adults trying to find their way in life.

Hedges facial expressions in these roles are so great that you see the confusion and anger on his face without him uttering a mumbling word.

But despite Ben’s troubled nature, there still exists a young man with a good heart who wants to do well in life and please his family.

Unfortunately, Ben cannot seem to shake the demons that have haunted him and his family for years.

The guilt of what he put his family through and the grief that he has caused other families might lead him to a destructive end because he struggles to face his past mistakes and struggles to forgive himself.

It does not help that other people have not forgiven Ben either.

However, “Ben is Back” will struggle to make moviegoers addicted to the movie.

People will like “Ben is Back,” but not love it.

Nevertheless, the emotional climax in “Ben is Back” might compensate for any lackluster and mediocre moments.