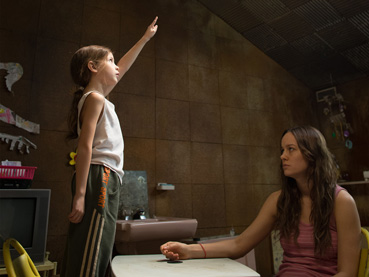 Late to the Party

Sorry for coming late to the “Room” party.

However, when RegalMag.com finally arrived the joint was still “popping” because of the award-winning performance of Brie Larson.

Some parties are overhyped just because of the A-list celebrities present, but the “Room” party is all that it is hyped to be and everyone is invited thanks to its release on DVD and Blu-ray.

Lenny Abrahamson’s film adaptation of the best-selling novel “Room” is fictitious but could truly be any factual kidnapping story flooding the news cycle on any given day.

Joy (Larson) is kidnapped at 17 years old when she helps a stranger locate his lost dog.

Now, seven years later she has not seen her family or friends since.

To make matters worse, her kidnapper Old Nick (Sean Bridgers) has locked her in a shed all of those years and constantly raped her on a daily basis.

Joy now has a five-year-old son Jack (Jacob Tremblay), who has never seen the outside world in his life.

He has only seen the “room” as his Ma calls it, which is a dirty shed with only one window facing the sky, a stove, a bed, a television and closet that they call “wardrobe.”

Despite his lack of real world skills or reality, Jack is a rambunctious and energetic child who has an imaginary dog named Lucky and at such a young age already knows how to read.

When the power is disconnected at Old Nick’s house, Joy devises a plan to escape their captivity and hopefully reconnect with family and friends still reeling from her disappearance.

Larson is simply marvelous in “Room” and deserves every inch of the Academy Award she received for Best Actress.

Her strength can be simply and remarkably described as the strength of a mother.

Society sees it everyday with single mothers who will forego food so that their children will eat.

Society sees it everyday with mothers willing to give their last pennies so that their child’s dreams can come true, even at the expense of their dreams.

And moviegoers see it with Larson’s performance as a mother who would rather take a chance of death and separation from her child forever instead of seeing him denied the beauty of real life.

Likewise, Tremblay is a young actor to watch for years to come.

Along with Abraham Attah (“Beasts of No Nation”) young Hollywood is in great hands with these talented young thespians.

The DVD/Blu-Ray release contains special bonuses like featurettes on the making of “Room,” audio commentary with Abrahamson and a recreation of “Room.”

However, nothing more is needed from this film but the performances of Larson and Tremblay.

All one needs to do is lock themselves in a room and enjoy acting at it’s best.

Along with some nachos and adult beverages, the perfect party can partake right in one’s own room with this DVD/Blu-ray.