Beasts of the Southern Wild Too Stereotypical 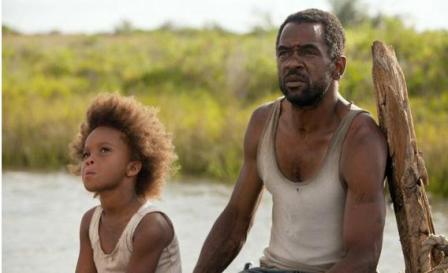 Beasts of the Southern Wild stars a young Quvenzhane’ Wallis as Hushpuppy (Slate.com)

Is it possible to respect a film’s artistry but despise its symbolism?  If it is, then Beast of the Southern Wild is the epitome of that sentiment and it is also the reason Regal Magazine got involved in film critiques; to offer a diverse voice to movie reviews.

Beasts of the Southern Wild is not a bad film, it is actually rather unique.  Unfortunately, the portrayal of African Americans as animal-like and beastlike harkens back to the day of blackface and minstrel shows for me.

The film is narrated by a 6-year-old girl named Hushpuppy (Quvenzhane’ Wallis), who lives in an area of the Delta called “The Bathtub,” which is populated by a primitive and poor people who think they are the civilized ones and that their side of the levee is beautiful while the developed side is inferior.

Hushpuppy lives by her father Wink (Dwight Henry) who has contracted a deadly illness and is trying to teach his daughter tough love, knowing that pretty soon she will be orphaned, since she has never known her mother.

Wink disappears for a significant portion of the film and Hushpuppy is forced to fend for herself.  She has her own “house” apart from her father’s home, lighting the stove with a blow torch, wearing a baseball helmet to protect her from the flames.  She is forced to eat cat food to survive in the absence of her father.

When her father returns his actions towards his daughter seem deadbeat and at times plays into the negative stereotypes of Black fathers, and Black males in general.  In one scene, he even encourages Hushpuppy to drink liquor.  However, despite the harshness of his actions, we see that love is involved in his odd parenting and that love for a child sometimes works in mysterious ways.

In Beasts of the Southern Wild, the inhabitants of “The Bathtub” are preparing for a catastrophic storm.  Many flee the Delta community, but Wink is determined to ride out the storm and prove his strength to his daughter.

Despite the harshness, his parenting style works for Hushpuppy and she becomes a strong young girl who can withstand any pressure from beast or nature.

Nevertheless, Beasts of the Southern Wild will be difficult for the African American community to sit through and appreciate.  In spite of the imagery captured by the filmmakers, the negative symbolism is impossible to ignore.

Although the film is not racial at all, as Blacks and Whites coexist with little or no mention of race, the fact that Blacks in Beasts of the Southern Wild refer to themselves as animals and beasts will not sit well with people of color.  Hushpuppy actually spends a significant portion of the film frolicking around in just her underwear.

The primitive way they live their life is so animalistic that it cannot help but offend the African American community.  When they are introduced to a civilized society while living in a shelter, they are too accustomed to their lifestyle that they cannot cope in a modern world.

So despite portraying a single Black father, which is rare in all media, who raises a young daughter to take care of herself after her parents have left this Earth, the primitive way in which they portray father and daughter negates the positives of this film, which stops it from reaching its full potential as a movie.