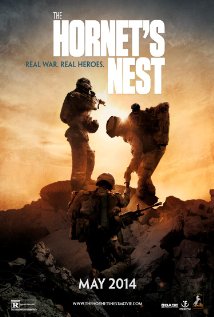 Inside the War Zone

“The Hornet’s Nest” is a documentary film based on ABC journalist Mike Boettcher and his son Carlos’ journey while reporting on America’s longest war with Afghanistan.

With only their cameras in tow, the Boettchers rely on their wit, skillful reporting and protection from American troops as they get the story told in the midst of battle.

“The Hornet’s Nest” starts off slow as they show an excerpt of a battalion taking fire trapped inside the Hornets’ Nest.

The storyline picks up with Mike Boettcher narrating on how his son Carlos came along with him on an assignment to Afghanistan.

Due to Mike’s career, the audience is soon connected to the pain and losses he suffered from choosing career over family.

Through one last opportunity for Mike and his son to reconnect, Carlos makes the decision to travel along with his dad on one of his dangerous assignments.

Although Mike is faced with the agonizing choice of not wanting his inexperienced son to come, he succumbs to the danger he knows they are about to embark on for a chance to bond with his son.

As the storyline moves on, the audience is soon carried into a day-in-the-life of America’s troops who put their lives on the line every day for God, country, family, Afghan civilians and more importantly each other.

Through Mike Boettcher’s camera, the audience will find themselves on the edge of their seats as troops maneuver in and out of combat zones with Afghan insurgents, who continuously take out U.S. troops with suicide bombs and IEDs, which are hard to detect.

One thing is for certain, war knows no color, age, or gender as the audience will see children being injured or killed by these underhanded tactics to take out American troops.

Through their journey, American troops embark on small victories, which lead them to war inside The Hornets’ Nest.

Although the battalions are prepared for battle mentally, physically and strategically, they are never equipped emotionally for the losses of their “brothers” who lost their lives in the name of justice.

After all the fighting, gunshots and bombing, the audience will feel the heartfelt emotions from these men who carry weapons of war, face death with bravery and purposely put themselves in harm’s way and also break down and cry over the agony of their comrades’ death.

The work of Mike and Carlos Boettcher on this documentary garners them an Emmy and a Peabody Award for providing unprecedented access into the longest war in U.S. history.

Kudos to the Boettchers for their fearless reporting and putting their lives in danger to capture the heart and soul of war, which warranted these prestigious awards in the area of “Hard News.”

In conclusion, I recommend “The Hornet’s Nest,” a gripping tale of a father’s love and sacrifice for his son, which brings them closer together and is in direct correlation of the love and sacrifice the American troops have for each other building a bond that last for a lifetime!