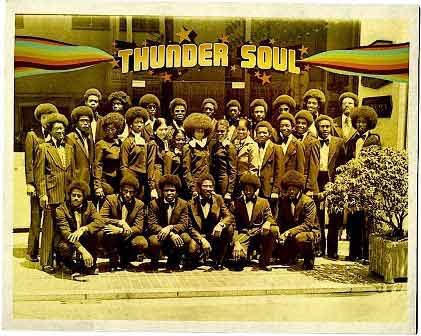 In northeast Houston during the 1970s, stage bands were probably the last thing on the minds of many teenagers.  Most students at the predominately Black Kashmere High School were into James Brown, Parliament and Sly Stone.

Nevertheless, under the direction of band director Conrad “Prof” Johnson, the afro-donning musicians of Kashmere introduced the world (literally) to “Thunder Soul,” becoming the country’s top-rated stage band, a form of band competition that was usually reserved for White high schools.

Executive produced by Academy Award winning actor Jamie Foxx, the documentary Thunder Soul chronicles the rise and ultimate fall of the once world-renowned Kashmere stage band and the band director who used music as a way of keeping his students out of trouble and bringing an entire community together.

For many of the students at Kashmere, a positive male role model in their home and on the streets of the infamous Fifth Ward community was rare.  However, the discipline and dedication that “Prof” showed to his musicians, including self-described thug Craig Baldwin prevented them from entering a life of crime and turned them into role models themselves.

On the stage, when most White schools were playing variations of jazz, the musicians from Thunder Soul brought the popular funk tunes of the day to stage, with their own unique arrangements created by “Prof.” When the respected director decided to bring dance to the stage to accompany the tunes, the competition was over.

The band won the national competition in Mobile, Ala. despite racism from the judges and followed up the next year by defending their title in Las Vegas.  Their success led to Thunder Soul recording albums, playing in Europe and Asia and inspiring a whole community of youngsters, who had been told they were inferior because of the color of their skin.

After the success of Thunder Soul, the basketball team used their inspiration to lead Kashmere to a state championship and most importantly, the school led the city of Houston in college scholarship recipients.

Nevertheless, with success comes envy and members of the school board plotted against “Prof” until he retired from Kashmere at the height of the stage band’s popularity.  But despite being short lived, the band and its remarkable director changed the lives of his students and his entire community in the process.  As a result of his dedication, Baldwin organizes fellow stage band alumni to perform together for the first time in 30 years to honor “Prof.”

As one can imagine, the band gets off to a rocky start as some members of Thunder Soul had not picked up their instruments since the 1970s.  Nevertheless, Baldwin rounds them into playing shape, before “Prof” suffers a mild heart attack days before the performance in his honor.

However, showing the strength that made him such a revered mentor, he musters enough energy to attend the performance and is blown away by all the love his students have for him 30 years later.

Although most documentaries are educational and not entertaining, Thunder Soul is extremely inspirational and shows what type of impact one person can make on the lives of others when they are dedicated to service.  For this reason, Regal Magazine recommends seeing this new film.